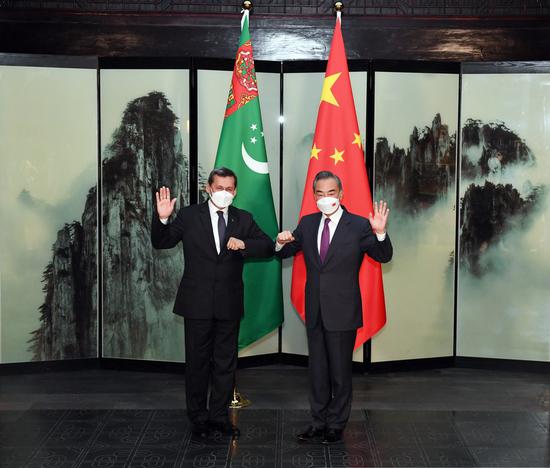 Noting that no matter how the international situation changes, China will remain Turkmenistan's reliable brother and dependable partner, Wang said China has full confidence in relations with Turkmenistan.

China is willing to work with Turkmenistan to advance the sustained, smooth and stable development of cooperation in various fields and open up broader prospects, Wang added.

Meredov said Turkmenistan regards China as the most important partner in energy cooperation and will not change this established position. Turkmenistan is willing to strengthen the alignment between its development strategy to revive the Great Silk Road and the Belt and Road Initiative and lift bilateral relations to a new high.

The two sides also exchanged views on cooperation between China and five Central Asian countries, as well as the Afghanistan issue.

Meredov expressed support for Afghanistan in drawing a clear line with terrorist organizations and resolutely cracking down on all terrorist forces including the East Turkestan Islamic Movement.