GDP target of around 5.5% 'achievable' 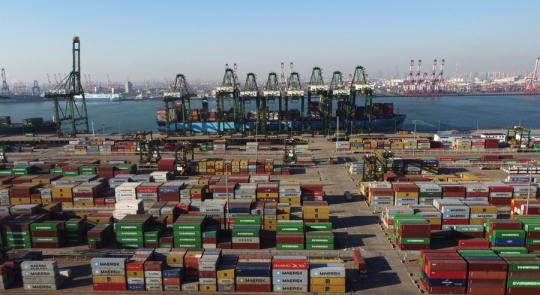 China is fully capable of achieving its GDP growth target of around 5.5 percent, as the country has ample space in macroeconomic policies to buffer short-term pressures, political advisers and experts said on Wednesday.

They also said the country should step up efforts to solidify the basis for long-term, high-quality development by nurturing new growth engines, such as technological innovation, while refraining from careless stimulus that could worsen economic structures.

"There are indeed challenges in terms of fulfilling this year's GDP growth target, but it is still achievable through efforts," said Liu Shijin, deputy director of the Committee on Economic Affairs of the National Committee of the Chinese People's Political Consultative Conference.

Macroeconomic policies will be adjusted against short-term headwinds, while emerging structural drivers, such as city clusters, digital economy and green transition, will also play a significant role in powering the economy, Liu said.

The People's Bank of China, the central bank, announced on Tuesday that more than 1 trillion yuan ($158.3 billion) in profits will be handed over to the Ministry of Finance to stabilize the economy, after the Government Work Report set this year's GDP growth target at around 5.5 percent and pledged more pro-growth measures.

Wang Tao, chief China economist at UBS Investment Bank, said she expects the Chinese economy to achieve the growth target by expanding 5.4 percent year-on-year, thanks to a potential further easing in fiscal and monetary policies.

Fiscal policy has turned more proactive, she said, as this year's broad-based deficit-to-GDP ratio may reach 7.2 percent after taking into account off-budget funds including the PBOC's remittance, up 2 percentage points from last year.

In addition, room remains for the PBOC to reduce the reserve requirement ratio to boost credit expansion, Wang said, as energy price increases due to geopolitical tensions are likely to be transitory and thus have a limited impact on monetary policy.

The growth in China's consumer price index, a main gauge of inflation, remained mild at 0.9 percent year-on-year in February, the same as January, as slumping pork prices offset the rise in oil prices, the National Bureau of Statistics said on Wednesday.

Yu Yongding, a senior economist at the Chinese Academy of Social Sciences, said the government should adopt fiscal and monetary policies more expansionary than last year to achieve this year's growth target.

"It is sensible to expand fiscal spending to boost infrastructure investments, a key buffer against the slowdown in real estate investments," Yu said.

While recognizing the ample space in macroeconomic policies, experts warned against any careless stimulus that could undermine long-term development, and emphasized accelerating economic upgrading for the sake of sustainable growth.

Liu called for steps to nurture structural drivers by addressing weak links of the real economy, including boosting the efficiency of fundamental industries, increasing the middle-income population and strengthening research and development in basic scientific areas.

With the potential of structural drivers realized, it is possible for China to maintain high-quality and sustainable economic growth of a medium rate not only this year, but throughout the 14th Five-Year Plan (2021-25) period, Liu said.

"We believe a more open China will fuel its own economy's upgrading while making essential contributions to global economic recovery," Zhang said.