CPI growth likely to be reasonable in 2022 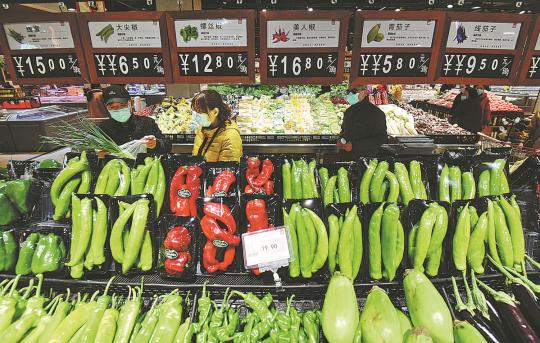 Inflation expected to be kept under control on govt measures

China's full-year inflation is likely to stay generally under control in 2022 with the government's effective measures to ensure stable supplies and prices of bulk commodities, experts said.

They said the country needs to be wary of imported inflation risks, and rising global commodity prices due to supply fears that geopolitical tensions may push inflation upward worldwide.

China's consumer price index, a main gauge of inflation, rose by 0.9 percent year-on-year in February, the same as a month ago, the National Bureau of Statistics said on Wednesday.

The growth in core CPI, the basket for which excludes food and energy prices, came in at 1.1 percent in February, down from 1.2 percent for the previous month.

Zhou Maohua, an analyst at China Everbright Bank, said the slowing growth of the core CPI is mainly affected by base effects, saying the 1.1 percent gain in core CPI in February indicates that domestic demand is recovering at a modest pace.

Zhou said the growth in the PPI slowed for the fourth consecutive month due to government measures to stabilize supplies and prices of domestic commodities and the high base effect.

"The slowing PPI growth and the narrowing gap between the PPI and CPI will help ease cost pressures on some midstream and downstream enterprises, stabilize the confidence of enterprises and enhance their vitality," Zhou added.

The analyst expects to see mild consumer inflation this year given China's sufficient supply of daily necessities and its ongoing efforts to boost supplies and stabilize prices, allowing policymakers to take more steps to boost domestic demand and stabilize growth.

Wen said the country needs to be wary of imported inflation risks and the potential reversal of current lower pork prices in the second half.

The government is targeting around 3 percent consumer inflation for 2022, unchanged from last year, according to the 2022 Government Work Report on Saturday.

Hu Zucai, deputy head of the National Development and Reform Commission, said China is capable of meeting its consumer inflation target for this year.

Hu said at a recent news conference that the NDRC will make a big push to ensure stable supplies and prices of key commodities such as grains, coal and iron ore. More efforts will also be made to reinforce supervision of futures and spot markets as well as crack down on market violations and illegal activities like spreading false information, hoarding, price gouging and speculation.

Tao Jin, deputy director of the macroeconomic research center at the Suning Institute of Finance, said prices of commodities such as coal and steel may remain generally stable for the full year thanks to the government's effective measures to stabilize supplies and prices.

Tao said inflation in China will likely remain generally controllable in 2022, and the CPI will rise moderately.

Wang Meiting, a researcher with the Bank of China Research Institute, said rising global oil and gas prices may affect China, but will not have a serious impact on China's energy security.