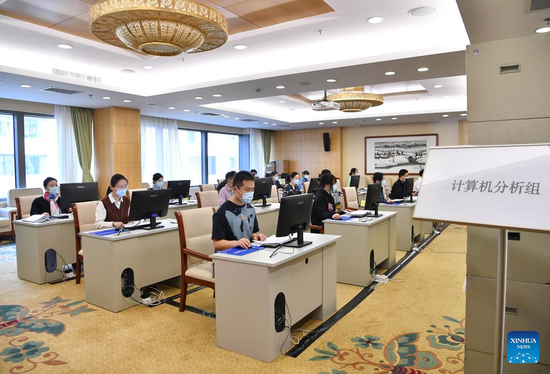 Staff members of the secretariat of the fifth session of the 13th National People's Congress (NPC) sort out suggestions from lawmakers in Beijing, capital of China, March 9, 2022. (Xinhua/Li Xin)

Deputies to the 13th National People's Congress (NPC), China's national legislature, had submitted 487 proposals as of noon Tuesday, the deadline for proposal submissions at the ongoing fifth session of the 13th NPC, said the secretariat of the session.

The secretariat said it had also received around 8,000 suggestions, criticisms, and comments from the NPC deputies.

The majority of the proposals are about speeding up legislation on energy, the digital economy, pre-school education, elderly care, and protecting women's rights and interests.

National lawmakers also made suggestions about promoting rural revitalization, boosting the sound development of the digital economy, and fighting against abducting and trafficking women and children, among others.