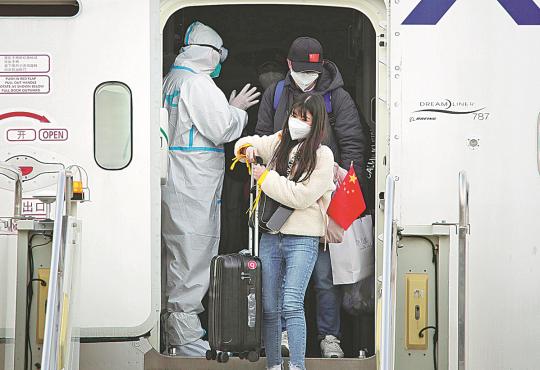 Chinese citizens evacuated from Ukraine arrive at an airport in Lanzhou, in northwest China's Gansu province, on Wednesday.(Photo/Xinhua)

Foreign Ministry spokesman Zhao Lijian said on Wednesday that the vast majority of Chinese citizens in Ukraine have been evacuated, including more than 100 students from Sumy, a Ukrainian border city with heavy fighting.

"Once again, I want to remind the few Chinese citizens that remain in Ukraine to stay safe, strengthen security precautions and preparations, and stay in touch with the Chinese embassy and Consulate General there," said Zhao, adding that the Chinese diplomatic and consular missions will continue to provide consular protection and assistance.

He also announced at a regular news briefing that at the request of Ukraine, the Red Cross Society of China will send humanitarian aid worth 5 million yuan ($791,815) to the country, including food and daily necessities.

The first batch of aid, which has 1,000 relief packages that include blankets, tableware and torches, has been sent from Beijing through a flight on Wednesday and will be used by the Ukrainian Red Cross Society to help displaced people.

When asked about the ban on Russian oil and gas imports announced by the United States and the United Kingdom as well as the European Union's decision on cutting back on its imports from Russia, Zhao said China firmly opposes unilateral sanctions without a basis in international law.

Instead of peace and security, welding the big stick of sanctions will only cause severe difficulties for the economy and livelihood of relevant countries. "Everyone will lose from this scenario, and sanctions will only intensify division and confrontation," he said.

Zhao said China and Russia have been maintaining their sound energy cooperation, and the two sides will continue to conduct normal trade cooperation, including in oil and gas, in the spirit of mutual respect, equality and mutual benefit.

Zhao also expressed firm opposition to any form of unilateral sanctions and long-arm jurisdiction carried out by the US after White House Press Secretary Jen Psaki said the US "clearly has means to take steps "if China does not abide by the sanctions that have been put in place on Russia.

He warned the US that it should seriously consider China's concerns when dealing with the Ukraine issue and US-Russia relations, and must refrain from undermining the Chinese rights and interests in any way.

"China will take all necessary measures to resolutely safeguard the lawful rights and interests of Chinese companies and individuals," Zhao said.