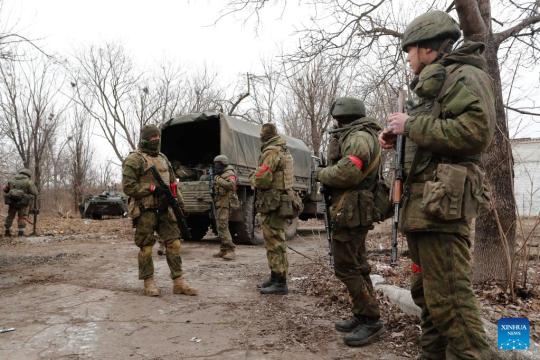 With Iran among those nations identifying the United States' actions as the root cause of the Ukraine crisis, experts said the European conflict stems from decades of provocative policies from the superpower and its Western allies.

Iran's Supreme Leader Ayatollah Ali Khamenei, in a televised speech on Tuesday, said Teheran "advocates ending the war in Ukraine". But he said a solution to any crisis only works when the root cause has been identified. "The root of the crisis in Ukraine is the policies of the U.S. and the West," he said.

"The U.S. regime creates crises, lives off crises and feeds on various crises in the world. Ukraine is another victim of this policy," Khamenei was quoted as saying on his English-language website.

Nagapushpa Devendra, an analyst at the Manohar Parrikar Institute for Defence Studies and Analyses in New Delhi, said Iranian society believes that U.S. policies toward Russia dating from the presidency of Bill Clinton "have led to the current situation in Ukraine".

Devendra said that Clinton in 1990 decided to let NATO remain in force despite the military alliance having served its purpose of defending the member states against any act of expansion by the Soviet Union.

Although formed in 1949 in response to the emerging Cold War, NATO has outlived that conflict. The alliance's subsequent expansion to include many former Eastern Bloc states has troubled Russia.

In 2019, the Ukrainian parliament passed a constitutional amendment stating Ukraine's commitment to joining NATO. In December 2021, the Russian Foreign Ministry demanded "legal guarantees" that NATO would not expand eastward.

Iran's supreme leader said the Western powers' support for the governments that they have placed in power is a mirage, and "all governments should realize this".

Khamenei said Ukraine and Afghanistan are examples of the West's unreliability.

Asif Shuja, an Iran expert and senior research fellow at the Middle East Institute at National University of Singapore, said Iran's reaction to the Ukraine crisis has so far been "measured".

Many in the West also believe that "the insistence of the U.S. to expand NATO closer to Russia's backyard was not a very prudent idea", Shuja said.

Yusoff said: "I think this is the time when some countries who are really concerned … to bring about peace in the world should hand-in-hand help each other to bring all these big powers together."