China to step up reform of rural credit unions 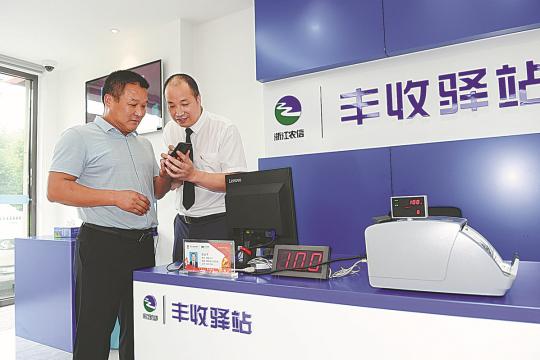 An employee (right) addresses a rural resident's queries on loan products at a service station in Huzhou, Zhejiang province, in August. (Photo/Xinhua)

Chinese central authorities recently unveiled a policy statement outlining key tasks to comprehensively push forward rural vitalization this year, requesting the strengthening of financial services in this regard. The authorities also called for active development of agriculture insurance and reinsurance.

The country has kicked off reform of rural credit unions in Zhejiang and Guangdong provinces. RCUs are cooperatives sanctioned by the People's Bank of China, the central bank, to provide credit in rural areas.

Guo Shuqing, chairman of the China Banking and Insurance Regulatory Commission, said the country is making good progress on the reform, which still takes time.

Local authorities should tighten the qualification requirements for executive management teams of rural credit unions, regulate the structure of corporate governance at RCUs and apply strict scrutiny to their shareholders, so that no single shareholder can dominate an RCU and no shareholder can misappropriate its funds to other investments, said Guo at a news conference on Wednesday.

The adjustment of oversight authority of DRC Bank is beneficial to further develop the local market in Dongguan, Guangdong province, and better serve local economic development, the bank said.

Before this, the local financial regulatory bureau of Zhejiang province issued a plan on Jan 24 to deepen the reform of provincial rural credit unions, improve their governance mechanisms and risk prevention and control mechanisms, and promote the restructuring of Zhejiang Rural Credit Union into a regional rural cooperative bank that has the status of an independent legal entity.

"We believe that the proposal of the restructuring plan for Zhejiang Rural Credit Union will start a new round of reforms of financial institutions in China, and the credit quality of rural financial institutions will hopefully improve significantly," said Zou Xuefei, an analyst with S&P Global (China) Ratings, who estimated the restructuring of rural credit unions will become a focus area of reform of China's commercial banking sector in the next few years.

"The next round of reform of rural commercial banks in China will focus on overcoming the problems of the majority of such banks, that is to say, having too few total assets, insufficient technological strength, poor corporate governance, weak risk management and fragile credit quality of individual institutions," Zou said in a report released on Feb 10.

"We estimate that after the reform of rural credit unions, rural commercial banks will improve to some extent in terms of their business strength, capital strength and risk management capacity. At the same time, they will maintain their fundamental positioning in serving agriculture, rural areas and farmers and also maintain their traditional advantage in deposit-taking," he added.

It is expected that each province will launch its own policy for advancing the reform of rural credit unions due to huge differences among rural financial institutions in capital, profitability and risks and different levels of regional economic development, he said.

Each province will find its own path for reform of provincial rural credit unions in the light of its actual circumstances. No matter which path is taken by a province, the reform should adhere to market principles and the rule of law, and the post-reform rural credit unions should be run as enterprises, said Zeng Gang, deputy director-general of the National Institution for Finance& Development.

At the same time, rural credit unions should strengthen investment in financial technologies and enhance their capacity in this area to comprehensively improve their competitiveness and achieve healthy, highly efficient and sustainable development, Zeng said.

After the central authorities unveiled the policy statement to comprehensively promote rural revitalization, the CBIRC announced on Feb 24 it had issued administrative measures for agriculture insurance underwriting and claims to deepen the supply-side structural reform of agriculture insurance.

The CBIRC required insurers to abide by laws of agricultural production, further shorten the time limit for loss assessment and effectively protect the rights and interests of insured farming households.

It also highlighted insurance technologies and added requirements for online services, technology empowerment and information security, in combination with the latest trends in development of agriculture insurance over the last few years.