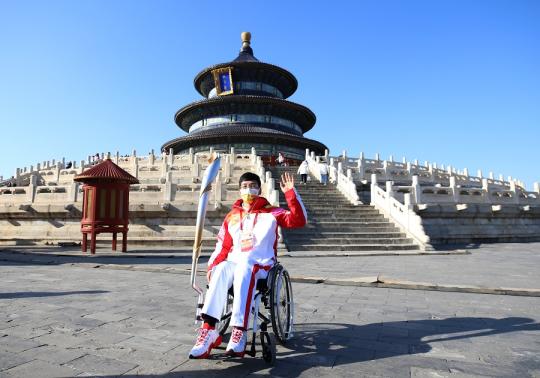 Nine flames, including one lit in Stoke Mandeville, England, were unified on Wednesday to form the official flame for the Beijing 2022 Paralympic Winter Games, which will be used in a three-day torch relay.

At a ceremony at the Temple of Heaven to unite the nine flames, Vice-Premier Sun Chunlan lit the Games torch, and handed it to Chen Jianxin, a member of the national wheelchair curling team.

Chen, the first torchbearer in the relay, will compete in the Games' wheelchair curling events, which start on Saturday.

"I feel honored to participate in the Games in my own country," said the 30-year-old Beijing native whose team won gold at the 2018 Winter Paralympic Games in Pyeongchang, South Korea.

"The stage is set. All I need to do is to make my best effort at the Games," a confident Chen said.

Hou Bin, a carrier of one of the nine flames, said he felt "especially happy" about the occasion. The 47-year-old lit the torch for the 2008 Summer Paralympics at the opening ceremony in the National Stadium.

Hou expressed his hope that more Chinese people with disabilities will take part in sports and change their lives.

Jiang Yuyan, who carried the same flame as Hou, said she is very proud to extend "the spirit of happiness, healthiness and inclusiveness".

"The Beijing Winter Paralympic Games will help raise public attention about … people with disabilities and empower many of them," said the 17-year-old who won the gold medal in the women's S6 50-meter butterfly at the Summer Paralympics in Tokyo last year.

Jia Hongguang used a Chinese-developed mind-controlled bionic arm donated by the Beijing Organising Committee for the Games to hold up one of the nine flames.

"There is no way I can express in words my feeling when I held it in the arm," said Jia, who has only spent two days learning how to use the bionic device.

Andrew Parsons, president of the International Paralympic Committee, said in a virtual speech to the ceremony that China's investment in winter para sports has been impressive.

"I truly believe in Beijing we are about to witness the highest ever standard of competition at the Paralympic Winter Games," he said.