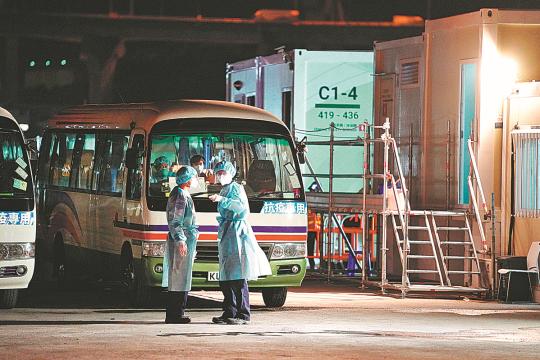 The patients were received by medical workers and later admitted to their own prefabricated units, each of which has three beds, a window and an air conditioner. There are also public toilets and showers. The facility looks simple but is tidy and clean.

As of Wednesday morning, at least 10 patients had been admitted to the facility, which was completed in just seven days and has 3,900 beds. The first to operate among the nine isolation and treatment facilities being built with the nation's help, it is expected to ease the city's huge demand for isolation facilities amid the city's worst coronavirus outbreak. The nine mainland-built facilities could add a total of 50,000 places for isolation and treatment.

As the city's infections have risen exponentially, tens of thousands of patients have had to wait at home for admission to isolation facilities. Hong Kong reported on Wednesday a record high for daily new infections, with 55,353 cases, bringing the city's total to more than 293,000.

Makeshift quarantine and treatment facilities can accommodate a large number of confirmed infected patients, and the approach is part and parcel of the anti-pandemic strategy of stamping out infections in the community. In 2020, the nation also helped Hong Kong build such facilities.

During the handover ceremony of the Tsing Yi facility on Tuesday, Hong Kong Chief Secretary for Administration John Lee Ka-chiu hailed it as an iconic project that embodies professionalism and selfless efforts, and symbolizes the country's ability to rally support.

A doctor and several nurses take care of patients at the facility, which is mainly managed by Hong Kong's Security Bureau. The medical staff may be increased as more patients move in.

Lai Cing-hon, a doctor who used to serve at the community treatment facility at Penny's Bay, said the Tsing Yi facility has a designated outdoor area where patients wearing masks can walk around.

The medical workers will carefully monitor the patients' situation, as well as the health condition of their family members, to judge how long they need to stay at the facility. In normal situations, as long as the patients test negative, they will be allowed to leave soon, Lai said.

Building such a facility in a week was no easy task. A total of 1,800 employees of China State Construction International Holdings worked day and night to complete the project. To save time, all the containers were purchased and assembled on the mainland before being shipped to Hong Kong.

Zhang Ming, who oversees the company's community isolation projects, said the Tsing Yi project was a severe test of the enterprise's resource allocation and rapid construction abilities. Thorough plans and the concerted efforts of workers were key to the project's success, Zhang said, adding that the company will work hard to complete other isolation projects soon to help more patients.

A Hong Kong worker surnamed Tang, who previously worked on other projects, applied to transfer to the Tsing Yi project because he thought it would be quite meaningful. Tang and his colleagues had to work around the clock. He also mobilized friends and colleagues to pitch in.

"I have a strong sense of mission for this project, and I tried my best in the work. It's my honor to contribute my own strength to Hong Kong people's benefits," Tang said.