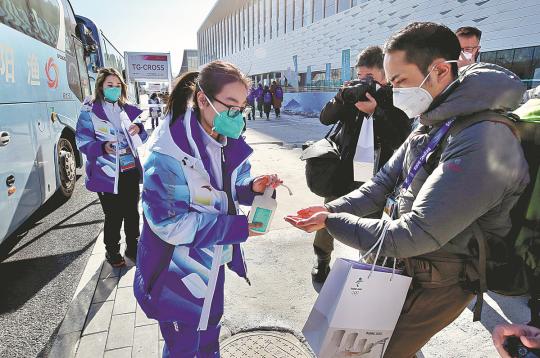 The Winter Olympics flame was extinguished in Beijing on Feb 20, capping Games that will be remembered not only for the thrill and emotion of competition, but also for a sense of security essential for any sporting event, particularly during the COVID-19 pandemic.

Thanks to joint efforts in devising and enforcing a closed-loop management system aimed at stemming the spread of the novel coronavirus, no major outbreak was reported at Olympic venues and no cases elsewhere in China were traced to the Games.

Officials and experts said the Beijing Winter Olympics provided valuable experience in hosting a major sporting event during a pandemic and demonstrated a feasible and safe way to resume international travel and communication.

In Shanghai, Zhang Wenhong, head of the infectious disease department at Huashan Hospital of Fudan University, said: "The virus containment wisdom offered by Beijing 2022 satisfied people's desire to interact with each other, which had long been constrained by the pandemic. The effects of such wisdom have proved surprisingly good."

Zhang said China managed to strike a balance between preserving its hard-won virus control outcomes and moderately reopening cross-border travel for better links with the outside world.

"Before the pandemic is completely brought under control …these experiences are expected to be applied to international exchanges in the political, economic and academic arenas," Zhang added. 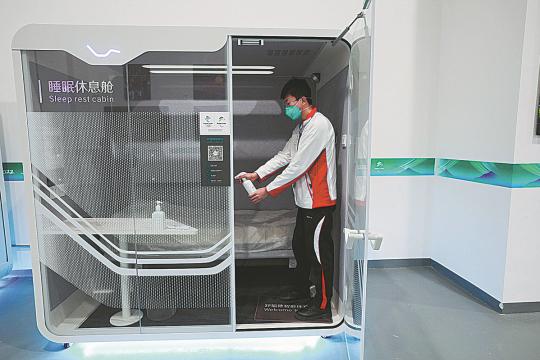 A sleeping cabin at the media center is disinfected. (China Daily/Ni Minzhe)

Hosting the Games and welcoming athletes and team members from around the world were viewed as a big test for China's efforts to prevent infections being imported.

The emergence of the highly infectious Omicron strain in November added to concerns over whether China could maintain its "dynamic zero COVID-19 policy" to swiftly eliminate local outbreaks.

The nation succeeded. From Jan 23, when the Olympic Village opened, to Feb 20, only 437 people tested positive out of more than 1.8 million tests.

International Olympic Committee President Thomas Bach said during a briefing on Feb 18: "The closed-loop situation was a success, with an infection rate of 0.01 percent, I guess. It (the loop) was one of the safest places on this planet, if not the safest."

Matt Graham, an Australian freestyle skier, said: "Once in the bubble it's great. You feel very safe and kind of go about your business and focus on the sport."

Preventing the virus penetrating the closed loop also contributed to minimizing the threat of it spilling over to outside communities.

Zhang Yingchun, who lives in Chaoyang district, Beijing, said she would have loved to watch her favorite figure skating star Yuzuru Hanyu in person, but she understood the Olympic committee's decision to keep athletes away from the public to prevent wide transmission of the virus.

"I still greatly enjoyed the Games on television and followed Hanyu on social media platforms," Zhang said. "After all, having fun and keeping safe are equally important in my opinion."