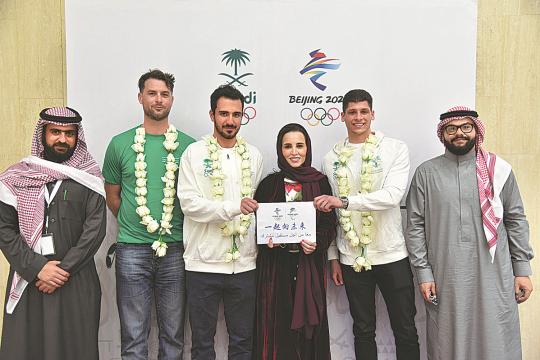 Athletes and political leaders from countries in South Asia, Central Asia and the Middle East look forward to the 2022 Beijing Winter Olympics being a grand event and success.

In the Middle East, Saudi Arabia has become the first Gulf country to participate in the upcoming Winter Olympic Games. Saudi skier Fayik Abdi will be officially representing the Arab nation in Alpine skiing races.

Abdulaziz Albaqous, corporate communications director at the Saudi Arabian Olympic and Paralympic Committee, expressed his excitement over the kingdom's participation in the games, adding that the Olympic movement has shown how solid and united it is even amid tough times.

Pakistani Prime Minister Imran Khan, who used to be a cricketer, will also visit Beijing and attend the opening ceremony on Feb 4.

"The visit is demonstrative of the fact that Pakistan stands with China, at a time when certain countries are trying to politicize the Beijing Olympics, and Pakistan rejects it," said Mustafa Hyder Sayed, executive director of the Pakistan-China Institute.

Pakistan's top skier Muhammad Karim is all set to represent his country at the Games. The 26-year-old from northern Pakistan is eyeing his first winter Olympic medal, and is hopeful that the Olympics will play a significant role in his career and boost his confidence.

"The Winter Olympics is a major event, and athletes from many countries are trying to improve their skills to hold a good position in the Olympics," he told Xinhua News Agency.

Salman Bashir, former foreign secretary of Pakistan, said people in his country admire the excellent preparations made by China and they look forward to viewing this grand event virtually. He also extended his congratulations to the Chinese people for hosting the Winter Olympics. "Beijing Winter Olympics 2022 will be a great success," he said.

"Besides being a spectacular sporting event, the Olympics will showcase the splendid achievements of the Chinese people in all domains and their exceptional skills in organizing world-class events with great imagination, style and finesse," he added. "This was also demonstrated at the 2008 Beijing Olympics, which were witnessed by over a hundred heads of state and government."

The Maldives' Foreign Minister Abdulla Shahid said he expects to attend the opening ceremony of the upcoming Winter Olympics, expressing his wish for Beijing 2022 to be a great success.

Arif Khan, a skier from India-controlled Kashmir, is the sole qualifier to represent India for the Beijing Winter Olympics. "It's going to be a big responsibility, being one in a billion and carrying the flag. That will be an inspirational moment," the 31-year-old told Reuters.

In Central Asia, the presidents of Kazakhstan, Kyrgyzstan, Tajikistan, Turkmenistan and Uzbekistan will all attend the opening ceremony.

Israel's delegation for the Olympics will consist of six athletes, reported the Times of Israel. Three athletes from Lebanon have been qualified to compete in the Winter Games.

Turkish Foreign Minister Mevlut Cavusoglu said he believed the Beijing Winter Olympics will be as successful as the 2008 Beijing Olympic Games.

Turkey will be sending a seven-member delegate to the Games.