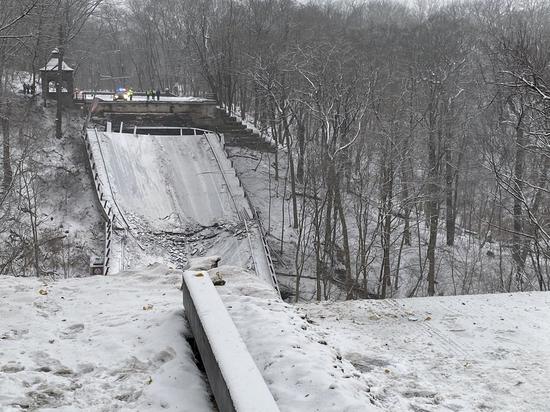 Ten people were injured after a bridge collapsed in Pittsburgh, U.S. state of Pennsylvania, on Friday morning, said officials.

The injuries are all minor and not life-threatening, while three people were transported to the hospital, Pittsburgh's fire chief Darryl Jones told reporters.

Four vehicles were on the bridge when it fell and the cause of the collapse is under investigation, Jones added.

Ed Gainey, mayor of Pittsburgh, revealed that the bridge over Hot Dog Dam Dog Park was last inspected in September.

U.S. President Joe Biden is scheduled to visit Pittsburgh later in the day to discuss infrastructure.

The White House said in a statement that Biden is aware of the incident and plans to proceed with his trip.

"The President is grateful to the first responders who rushed to assist the drivers who were on the bridge at the time," the statement read.

The agency also reported a "gas line has been cut" after saying "there is a strong smell of natural gas in the area."

Residents and motorists have been urged to avoid the area.

More than 220,000 U.S. bridges need major repair work or should be replaced, according to an analysis by the American Road & Transportation Builders Association analysis in 2021. That figure represents 36 percent, or more than one-third, of all U.S. bridges.

The states with the most serious or worse bridge conditions are Iowa, Oklahoma, Illinois, Pennsylvania, Missouri, and Louisiana, the study also showed.

In a statement on Friday, Lieutenant Governor of Pennsylvania John Fetterman called the collapse "the latest in a long line of preventable, man-made disasters."

"Our infrastructure is failing our people. Our roads and bridges, which are supposed to connect us and bring us together, are increasingly putting us in danger," Fetterman bemoaned.