Nation's solar research to get boost from satellite 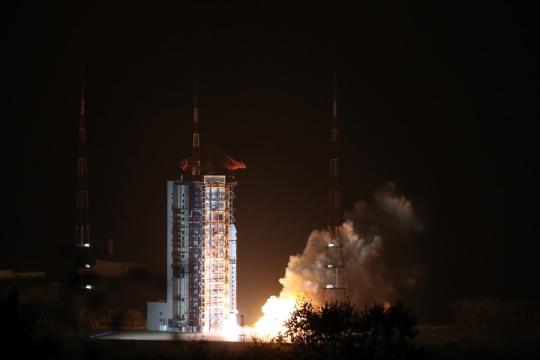 China's solar observation satellite has achieved some scientific and technological feats during its ongoing in-orbit trial operation, according to a space official.

Zhao Jian, head of the China National Space Administration's Earth Observation System and Data Center, said at a news conference in Beijing on Friday that the satellite Xihe, named after the sun goddess in ancient Chinese mythology, has carried out more than 40 technological tests and over 290 imaging operations and has verified its equipments' capabilities.

"In its capacity as a solar research spacecraft, Xihe has obtained the sun's H-Alpha spectral lines, becoming the world's first satellite to accomplish this goal," the official said.

"Scientists have been studying the H-Alpha spectral lines for a long time to research solar flares, but they had to rely on ground-based observation platforms that are affected by interfering factors such as atmospheric disturbances. Now, our satellite has started to provide them with spectral data that's much better than before, enabling them to perform high-resolution observation and imaging of the sun."

Zhao said it is important for humankind to study the sun because solar activities have many effects on life on Earth.

"Obtaining more knowledge about the sun helps to avoid the adverse effects of solar activity, especially disruption of the Earth's communications and navigation services, and to better protect spacecraft and astronauts," he said.

Studying the sun also allows scientists to deepen their research on the origin and evolution of celestial magnetic fields, the acceleration and distribution of high-energy particles, and other physical phenomena, the official said.

The news conference was held by the State Council Information Office to issue a white paper titled China's Space Program: A 2021 Perspective, which reviews the nation's space activities over the past five years and sets out the major tasks for the next five years.

The document is the fifth of its kind since 2000, when China published its first white paper on space activities.

Also known as Chinese H-Alpha Solar Explorer, Xihe was launched on Oct 14 from the Taiyuan Satellite Launch Center in Shanxi province. It is tasked with helping scientists deepen their knowledge of our nearest star.

The 508-kilogram satellite is traveling in a sun-synchronous orbit about 517 kilometers above the Earth.

The China National Space Administration said the mission is expected to provide scientists with the first high-quality observation data of the source area of a solar eruption and will improve China's research capabilities in solar physics. It is very meaningful to the nation's space exploration and satellite technology, the administration said.

"We will publish some of the program's scientific and technological accomplishments this year," Zhao said at the news conference.

According to Wang Wei, deputy director of the Shanghai Institute of Satellite Engineering at the Shanghai Academy of Spaceflight Technology and project manager of the satellite, Xihe is China's first space-based solar telescope and is designed to work for at least three years.

Its scientific payload is an H-alpha imaging spectrograph that can, for the first time, acquire full-disk spectroscopic solar observations in the H-alpha wave band, Wang said.