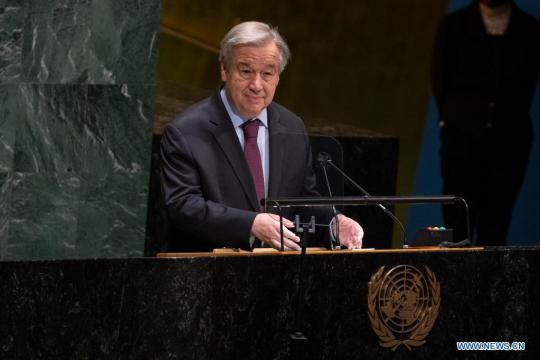 China's top ambassador to the United Nations on Tuesday made congratulatory remarks to UN Secretary-General Antonio Guterres for starting his second term on Jan 1.

"China speaks highly of the secretary-general's work in his first term. As we embrace the new year full of expectations, Secretary-General Guterres also officially started his second term. Allow me to extend to him my heartfelt congratulations and best wishes," said Zhang Jun, China's permanent representative to the UN.

Zhang said that in the past five years, Guterres has led the UN Secretariat in "actively dealing with global challenges such as the impact of unilateralism and the COVID-19 pandemic and played an important role for world peace and security, sustainable development and international anti-COVID cooperation".

The envoy said that the combined forces of change and a pandemic both unseen in a century have brought many grave challenges to the world.

"As the most important platform for building international consensus, addressing global challenges and practicing true multilateralism, the UN's role has become even more irreplaceable than ever before," he said.

"As all parties have higher expectations of the secretary-general, the burden on his shoulders has also grown heavier. We believe that in his second term, the secretary-general will continue to firmly carry out the responsibilities entrusted by the UN Charter, uphold an objective and impartial position, and safeguard and practice true multilateralism to make greater contributions to addressing global challenges and promoting human progress," said Zhang.

The ambassador pointed out that China's support to the UN has been consistent, enduring and reliable. "China always stands side by side with the UN in facing whatever difficulties or challenges. History has proven time and again that a better China will enable a better world and lend stronger impetus to the cause of the UN," he said.

Zhang stressed that last October, China solemnly celebrated the 50th anniversary of the restoration of the lawful seat of the People's Republic of China in the UN. In a speech, President Xi Jinping called on the international community to resolutely uphold the authority and status of the UN. Guterres attended the commemorative meeting, the envoy pointed out.

Fifty years and beyond, China-UN cooperation now stands at a new historical starting point, Zhang said. "China will continue to champion true multilateralism, advocate common values for all humankind and firmly uphold the international system with the UN at its core, the international order based on international law, and the basic norms governing international relations underpinned by the purposes and principles of the UN Charter," he added.

"We will keep supporting the UN in playing its central role in international affairs and work with all parties to write a new chapter in building a community with a shared future for mankind," Zhang said.

Zhang said that from the new starting point, China will continue to live up to its responsibilities and carry out its duties in protecting world peace, advancing common development and addressing global challenges.

"As a responsible major country, China will continue to promote the efforts to settle disputes by political means and resolve differences through dialogue, thus making greater contributions to the maintenance of international peace and security," he said.

The envoy pointed out that on Jan 3, the leaders of the five nuclear-weapon states, i.e. China, France, Russia, the United Kingdom and the United States, issued a joint statement on preventing nuclear war and avoiding arms races, speaking in one voice for maintaining global strategic stability and reducing the risk of nuclear conflict.

"This has set a good example for the international community to enhance mutual trust and strengthen cooperation and coordination on issues bearing on peace and security," he said.

Zhang said that China supports the prioritization of development issues on the UN's agenda. The Global Development Initiative proposed by President Xi aims to form international synergy to facilitate post-COVID recovery, accelerate the 17 Sustainable Development Goals and achieve common development for all.

"The initiative has been widely welcomed and echoed," he said. Leveraging the UN platform, China will strengthen strategic alignment with all parties to coordinate socioeconomic development and ecological conservation, actively respond to climate change, and form strong synergy for the full implementation of the 2030 Agenda for Sustainable Development and the Paris Agreement, leaving no country or person behind, he added.

Zhang said that the COVID-19 pandemic is the gravest challenge currently facing all humanity. He emphasized that China has actively responded to the initiative by the secretary-general and has provided 2 billion doses of COVID-19 vaccines to over 120 countries and international organizations, more than any other country in the world.

"We will fully implement the Global Vaccine Cooperation Action Initiative and proactively advance vaccine upgrade and R&D cooperation. We will take effective measures to close the immunity gap and foster greater international preparedness for future pandemics," he said.

"Today is the one-month countdown to the opening of the Beijing 2022 Olympic Winter Games," he said. "The Winter Olympics has entered the 'Beijing time.'"

"China is ready to present a simple, safe and splendid Olympics to the world. China warmly welcomes Secretary-General Guterres and other distinguished guests from all around the world to join us in the Winter Olympics, together for a shared future," Zhang said.