Railway passengers in China to top 3 bln in 2022 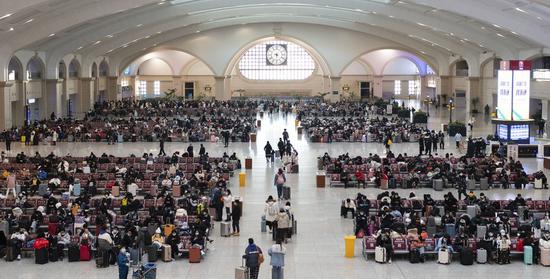 China's railway operator said on Tuesday that it expects to dispatch around 3.04 billion passengers in 2022, up 20 percent year on year.

Goods delivered by rail are forecast to grow 2.1 percent year on year to reach over 3.8 billion tonnes, said the China State Railway Group Co., Ltd. at its annual conference.

The railway operator will accomplish its investment targets and advance national key projects, such as the Sichuan-Tibet Railway, to a high quality standard, it said.

Over 3,300 km of railways will be put into service this year, according to the China State Railway Group.

By the end of last year, the operating length of China's railways surpassed 150,000 km, of which the high-speed railway network accounted for more than 40,000 km.