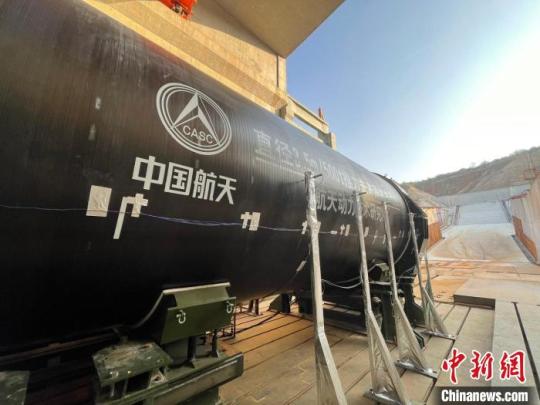 Chinese space engineers have conducted the first ignition test of the most powerful solid-propellant rocket engine in the world, which will be used on new-generation rockets, according to the Academy of Aerospace Solid Propulsion Technology in Xi'an, Shaanxi province.

The academy, a subsidiary of State-owned space giant China Aerospace Science and Technology Corp, announced on Tuesday afternoon that a test that morning had been successful.

The engine has a diameter of 3.5 meters, 150 metric tons of solid propellants and a thrust power of 500 tons, making it the world's most powerful and fuel-efficient integrated solid-propellant rocket engine, the academy said in a statement, noting that the test took place at an engine testing facility in Xi'an.

Wang Jianru, chief designer of the engine, said that it integrates a number of advanced technologies and high-performance composite materials and has world-class capability.

"The test's success means that we have achieved substantial progress in improving the capability of our solid-propellant carrier rockets. It also laid a key foundation for our research and development for a 1,000-ton-thrust engine," he said, noting that the new engines are necessary for China to build super-heavy rockets.

Researchers at the Xi'an academy have begun to design a variant based on the 500-ton-thrust type, Wang said, explaining that the variant will be used on the super-heavy rocket under development by Chinese engineers.

Researchers at the China Academy of Launch Vehicle Technology in Beijing, another CASC subsidiary, are designing a super-heavy rocket－the Long March 9－that will likely become one of the world's largest and mightiest launch vehicles.

The rocket is expected to enter service around 2030. It will be 93 meters tall and will have a liftoff weight of 4,140 tons and a thrust of 5,760 tons. The diameter of its core stage will be about 10 meters, according to designers.

The craft will be so powerful that it will be able to transport spacecraft with a combined weight of 140 tons to a low-Earth orbit hundreds of kilometers above the ground, and will also be capable of deploying spaceships weighing up to 50 tons to an Earth-moon transfer trajectory for lunar expeditions.