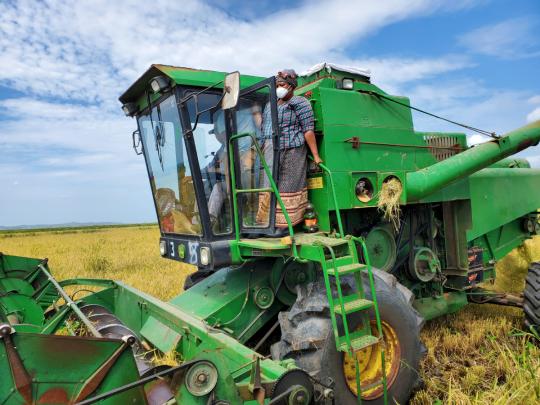 In addition to building railroads, schools and water-conservancy projects, CR20G, a subsidiary of State-owned China Railway Construction Corp Ltd, has helped farmers in its markets in Mozambique and other African nations achieve stable and high yields by introducing China's practical agricultural technologies, conducting related services and applying modern machinery to assist them in ensuring grain security.

Supported by the China-Africa Development Fund, CR20G built a rice processing plant in Xai-Xai, capital of Gaza province in Mozambique, in 2017. The company has been running this project－which is also China's largest rice planting project in Africa－for more than four years.

By the end of June this year, the project completed the harvesting of rice for the 2020-21 planting season, with a harvested area of 36,000 mu (2,400 hectares) and 16,600 metric tons of rice. All of the rice from the harvest has been sold in local markets, said Guo Wei, CR20G's country head for Mozambique.

Besides generating a total of 14,000 jobs for local residents in the areas of farming, transportation and rice processing businesses to date, the project led more than 500 cooperative growers to carry out rice planting work. The grain yield per mu has increased from about 200 kilograms to more than 400 kg.

To promote sustainable growth of this project, Guo said the company will constantly seek innovative measures, including introducing drones for field management, building modern agriculture and gradually extending the industrial chain in Mozambique in the coming years.

"We are confident that we can harness the new growth opportunities presented by many countries' plans to build modern agricultural projects, as well as regional transportation and service hubs, upgrade their urbanization and modernize their economies for scale and sustainable growth," Guo said.

Such countries have already seen years of infrastructure development under the BRI framework, he added.

Apart from developing businesses in its home market, the Chinese company has established overseas operations management centers in countries such as Angola, Mongolia, Mozambique, Pakistan and Algeria. It has also enriched its overseas experience in areas such as foreign staff training as well as project and risk management.

In addition to shipping more daily goods and medical products to markets involved in the BRI, China's nonfinancial outbound direct investment in these economies soared 9.9 percent year-on-year to $11.29 billion during the first seven months of 2021, said the Ministry of Commerce.

"China's growing ODI in high-end manufacturing, agriculture, digital and innovation businesses is likely to lead a new round of 'going global' for domestic companies," said Zhao Ping, deputy head of Beijing-based Academy of China Council for the Promotion of International Trade.

This will provide opportunities for other countries to enhance ties with China and increase their ability to avoid risks as the country has ensured the smooth operation of the global supply chain, Zhao said.

The BRI will not only reinforce trade ties among Asian, African and European countries, but also pave the way for Africa to become an important part of the world's supply chain and attract more foreign capital. Doing so will help boost the continent's development and help improve people's livelihoods, said Wang Tiedong, a professor specializing in regional economic development at the University of International Business and Economics in Beijing.