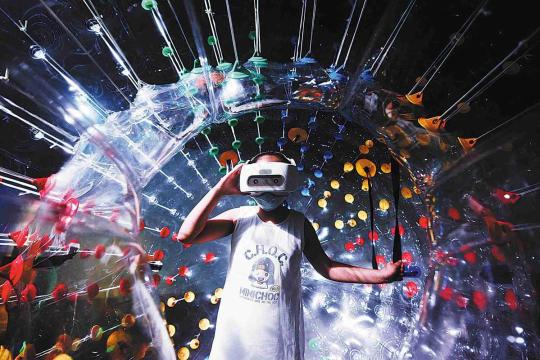 China's tighter oversight of the internet sector does not contradict plans to bolster its development. Instead, regulation over the fast-expanding consumer-oriented platform economy will motivate internet companies to pursue next-generation innovation, experts said.

Dang Chongyu, an economist at Founder Securities, said in a research note that anti-monopoly moves go hand in hand with China's support for technological innovation. In the future, tech giants may increase their investment in a new technological revolution spearheaded by artificial intelligence, big data and cloud computing.

According to Dang, China highlighted strengthening antitrust enforcement and preventing the disorderly expansion of capital at high-level meetings such as the Central Economic Work Conference in December 2020. At the same time, the nation also pledged support for the innovation and development of platform enterprises, saying that these assets enhance international competitiveness.

The outline of the 14th Five-Year Plan (2021-25) for national economic and social development and the long-range objectives through the year 2035 call for China to pursue innovation-driven development and create new developmental strengths.

From both the standpoint of national policies and the demand of future development, the long-term trend of the platform economy is to stick to technological innovation and empowerment, Dang said.

Sealand Securities said in a research note that as China strengthens supervision of its platform economy, the era of relying on platform monopolies to obtain excess profits is coming to an end and the era of hard technology will begin.

Hard technology refers to key and core technology that requires long-term research and development as well as continuous efforts and investment.

Ren Zeping, chief economist at Soochow Securities, said the trend is successfully reducing monopolies of firms in real estate, finance, education, internet and other sectors which had previously harmed people's livelihoods and the real economy. At the same time, vigorously developing manufacturing, hard technology, real economy and other sectors are key.

Hong Yongmiao, dean of the School of Economics and Management at the University of Chinese Academy of Sciences, said binding laws and regulations are needed to prevent monopolies and disorderly capital expansion. Such laws will also help beef up the governance and regulation of digital platforms, and strengthen protections for workers, consumers and small and medium-sized enterprises.

At the same time, careful efforts are also needed in regulating digital platforms, since China still needs to nurture innovation-minded companies with international competitiveness. Government regulation should not only prevent monopolies and the disorderly expansion of capital, but also continue to protect and encourage innovation, Hong said.

"In the face of cutthroat international competition, globally competitive Chinese companies are indispensable for China's digital economy, thus the government will offer more support," added Hong who is also a fellow of the World Academy of Sciences for the advancement of science in developing countries.

For full-fledged digital platforms, the government should focus on micro-regulation to prevent monopoly and disorderly competition while also supporting companies' quests to go global. Government regulations should be adjusted when needed for the optimal "dynamic equilibrium "under different circumstances, Hong said.

In a commentary on the State Administration for Market Regulation's fine on Alibaba Group Holding Ltd for its monopolistic behavior, People's Daily said "the act of tugging at the sleeve is also an act of love", which means that self-correcting checks on minor misconduct is meant to avoid larger missteps.

"Regulating the fast-expanding internet sector doesn't contradict plans to bolster its development. They are instead complementary and mutually reinforcing, which holds true even on a global scale," it said.

"The penalty serves to guide the company's development, purify the industry's environment and forcefully safeguard market order for fair competition."