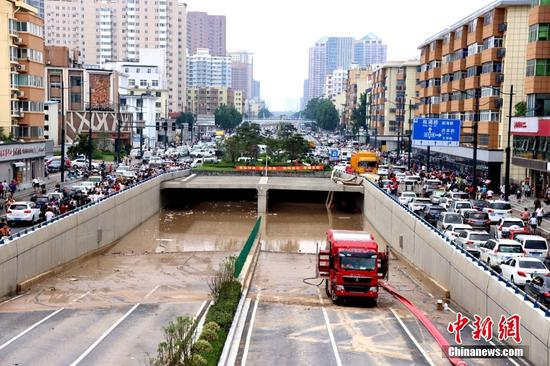 Kaifeng, a city in rain-ravaged Henan Province in central China, on Saturday ordered the full suspension of construction and business operations to cope with heavy rainstorms forecast for Sunday and Monday.

All enterprises, tourist resorts and construction sites are ordered to shut down or halt operations from 8 a.m. Sunday to noon on Monday, and roadside shops other than those providing life necessities should suspend operations by midnight Saturday, according to the city's headquarters of flood prevention and drought control.

The suspended sectors may reopen afternoon on Monday if the rain situation allows.

The city activated the second level emergency response for flood prevention at noon on Saturday as heavy rainstorms with rainfall up to 250 mm are forecast from Sunday to Monday. The maximum hourly precipitation rate may reach 60 to 90 mm, according to the city's weather department.

In Zhengzhou and Xinxiang, two cities that were hard hit by rain-triggered floods last month, the second level emergency response for flood prevention was also activated.

In the provincial capital Zhengzhou, the residents living in flood-hit zones, mountainous areas, and those living on the first floor of buildings in the urban area were requested to be evacuated, according to a circular issued by the city's headquarters of flood prevention and drought control.

All tourist resorts were ordered to suspend operations, and all personnel at roadside shops should be evacuated. The suspension will last until 8 a.m. Tuesday. Buses and outdoor construction sites should also timely suspend, said the circular.

Starting on July 16, Henan has been hit by record rainstorms, killing more than 300 people with 50 others still missing as of early August. Multiple cities in the province have reported staggering precipitation levels.