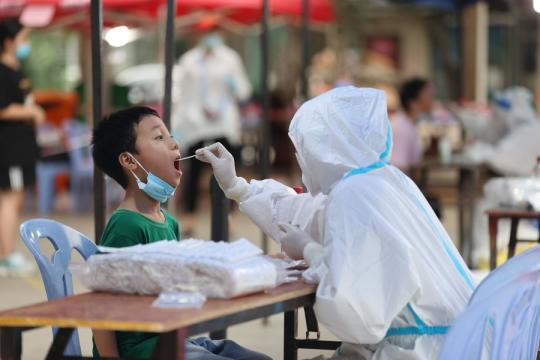 A medical worker takes a swab sample from a child for COVID-19 nucleic acid test at a testing site in Siming district of Xiamen, East China's Fujian province, July 30, 2021. (Photo/Xinhua)

The domestic COVID-19 outbreak affecting 18 provincial-level regions in China since late July is complicated but under control, and the risk of seeing widespread outbreaks across the country is low, health officials said on Friday.

More than 777 million people in China have completed full COVID-19 vaccinations as of Thursday, Mi Feng, a spokesman for the National Health Commission, said during a news briefing. That accounts for about 55 percent of the nation's population.

In total, China has administered more than 1.83 billion doses as of Thursday, including 60 million delivered to those between the ages of 12 and 17, according to He Qinghua, an official at the commission's Disease Prevention and Control Bureau.

China reported 47 new locally transmitted infections, and 52 imported cases among incoming travelers on Thursday, as it is coping with a resurgence of the novel coronavirus driven by the Delta variant.

Since an infection cluster linked to an international airport broke out in Nanjing, Jiangsu province, on July 20, He said 48 cities in 18 provinces have reported local cases, registering a total of 1,282 confirmed infections.

However, 36 of these cities have reported no new infections for five straight days. Now, only Yangzhou in Jiangsu province, Wuhan in Hubei province and Zhangjiajie in Hunan province are seeing notable new daily cases, He added.

As genome sequencing results of recent infections have shown that domestic transmissions of the virus are all triggered by imported cases, He said it is essential to tighten COVID-19 preventive measures among key staff members working in high-risk positions.

In a guideline released on the commission's official website on Friday, the number of facilities considered at higher risk of exacerbating viral spread has increased to 85 from 65.

Personnel categories deemed at higher risk of contracting the disease were also expanded to include such jobs as cleaners, drivers, auxiliary police, rescue personnel volunteers, community workers and tour guides.

In a separate guideline released by the commission the same day, it urged the public to wear masks not only indoors, but also outdoors where people tend to gather, such as parks, squares and theaters.

"In Beijing, for instance, the period of time required to locate and quarantine close contacts of confirmed infections has been reduced to eight hours," Gao said.

He added that the core of all contagion control work is to remain vigilant against the virus at all times.

As the domestic COVID-19 vaccination drive is proceeding smoothly, Gao said more than 40,000 medical institutions across the country have participated in the undertaking, including about 17,000 at the grassroots level.

Wang Huaqing, chief expert on immunization planning at the Chinese Center for Disease Control and Prevention, said vaccinating children and teenagers is an indispensable step toward building herd immunity.

"In some countries, incidence rates of COVID-19 among children are on the rise and some severe cases and deaths have been reported," he said, adding that infected children, like adults, are able to transmit the virus.