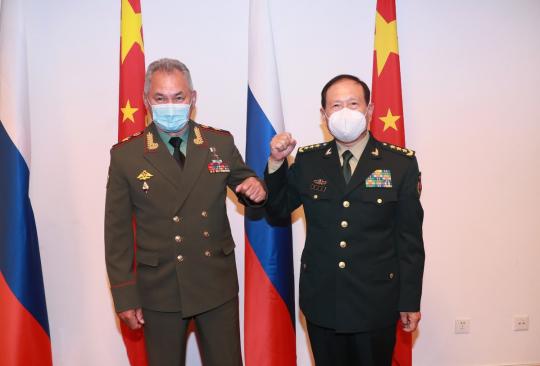 China and Russia will firmly safeguard the core interests of the two countries, uphold global equity and justice, and protect regional security and stability, according to Chinese State Councilor and Defense Minister Wei Fenghe.

The two nations need to communicate about their stances, build consensus, intensify cooperation and coordinate actions in dealing with changes in the situation in Afghanistan and Central Asia and in suppressing terrorism, Wei said on Wednesday in Tajikistan's capital Dushanbe at a meeting with his Russian counterpart Sergei Shoigu.

The Chinese official was in Dushanbe for the meeting of defense ministers from member countries of the Shanghai Cooperation Organization, according to a statement from the Chinese Defense Ministry.

Wei said China-Russia ties have remained strong amid the ongoing COVID-19 pandemic and global geopolitical changes, and have become significant in terms of maintaining global stability.

He noted that the extension of the China-Russia Treaty of Good-Neighborliness and Friendly Cooperation, jointly announced by Chinese President Xi Jinping and Russian President Vladimir Putin via video link in June, demonstrated to the world the two countries' shared determination to uphold the treaty, bolster their friendship and extend strong support to each other.

Wei urged both sides to strengthen comprehensive strategic cooperation and ensure the stable and smooth development of bilateral ties.

During their meeting, Shoigu said cooperation between the two nations' militaries has continued expanding and rising to a new high, and it has produced remarkable achievements in recent years. Russia is willing to further boost military and defense technology cooperation with China, he said.

Shoigu added that given the growing uncertainty in the regional security environment, Russia is paying a great deal of attention to the new situations in Afghanistan and Central Asia and values China's stance regarding Afghanistan.

Russia will continue to work with China and other nations in the region to safeguard regional peace and stability, he said.

In another development, during his meeting with Tajik President Emomali Rahmon on Tuesday, Wei said China will work with the Central Asian nation to advance comprehensive military cooperation.

He said that considering the new situation in Afghanistan, China is willing to deepen anti-terrorism collaboration with Tajikistan to prevent cross-border terrorist acts and jointly fight terrorism.

Rahmon said his country is grateful for China's support in the defense and security fields, and wants to join forces with China in cracking down on terrorism, separatism and extremism, and dealing with the new situation in Afghanistan.