New Tibet, the rising 'Roof of the World'

There are very few places on this earth where humanity can transcend the boundaries of race and nationality, where one can go beyond the human perspective and understand that we are one with the universe.

Tibet is one such destination.

"There's natural beauty around the world, but Tibet is an example of real natural beauty," said American economist David Blair. "It's great to have an opportunity to see."

"It's very spiritual," said Shaun Rein, another American expat living in China and founder of a Shanghai-based market research firm.

Invited by Xinhua's China Chat show, Blair and Rein spent a week in southwest China's Tibet Autonomous Region on a fact-finding mission to acquire firsthand experience of the lives of everyday Tibetans, local socioeconomic development, and the real face of new Tibet, possibly one of the most misunderstood places in the world. 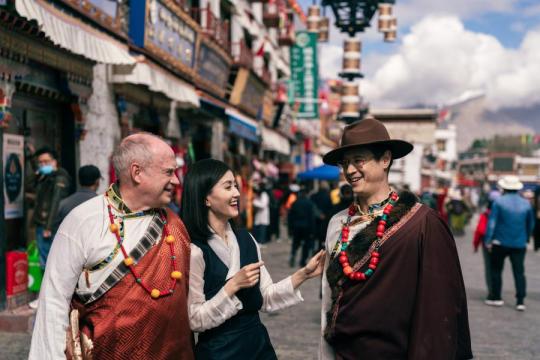 A subsequent democratic reform in the late 1950s abolished theocracy and feudal serfdom in Tibet. The 14th Dalai Lama, clinging jealously to the system of serfdom and slavery that dominated old Tibet, fled China in the wake of a failed coup to resist the reform.

These great changes, as noted in the late American journalist Israel Epstein's 1983 book Tibet Transformed, "were profoundly emancipatory, physically and mentally, for the overwhelming majority of Tibetans."

With strong support from the central government and the rest of China, and boosted by the great endeavors of people of all ethnic groups in the region, Tibet is catching up with other parts of the country in terms of socioeconomic development.