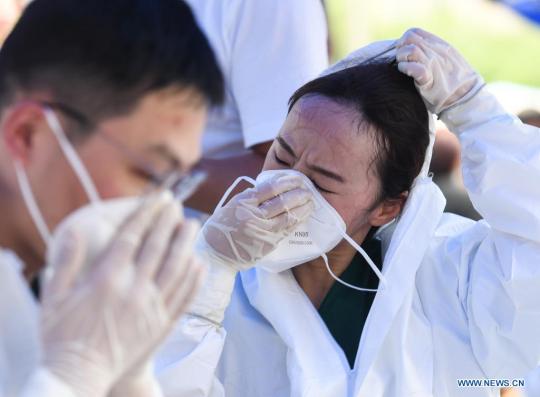 Medical workers get prepared to operate at a testing site in a residential compound in Jiangning district of Nanjing, East China's Jiangsu province, on July 21, 2021. (PHOTO/XINHUA)

More than 5 million of the 9.3 million residents of Nanjing, Jiangsu province, had completed nucleic acid testing as of Thursday, as the city reported a total of 13 confirmed cases and nine asymptomatic carriers.

Citywide testing has been underway since Wednesday, with people lining up at 1,452 temporary testing centers for samples to be taken.

The mass testing is being assisted by around 50,000 volunteers, including students, local residents and Communist Party of China members, as well as 14,000 social workers.

Xu Minsheng, a Nanjing Health Commission official, said at a news conference on Thursday afternoon that the city now has 76 nucleic acid testing institutions, which are able to handle 3.5 million tests per day.

"Jiangning district tested 2.046 million samples on Wednesday," Xu said. "A total of 4,930 health workers from all of the city's medical institutions participated in the district's testing work."

Jiangning, where Nanjing Lukou International Airport is located, set up 551 testing centers and completed nucleic acid testing of its 1.9 million residents and some travelers within a single day.

Plenty of supplies have been delivered to guarantee normal life for the 30,000 residents in the district's 29 communities and villages, which have been under lockdown since Tuesday, said Fu Jinjin, deputy head of Jiangning district. In addition, five communities in the city's Lishui district had also been locked down by Thursday.

"Local residents have shown great understanding and support for our work," she said. "We thank them a lot for that."

The communities and villages will be disinfected twice a day. Disinfectant, ethyl alcohol and disposable gloves have been provided to all local residents.

On Thursday, Nanjing upgraded the status of 10 of its communities from low-risk to medium-risk level for COVID-19.

Eastern Airports, a company that manages seven airports in Jiangsu, has ordered staff members in key positions to be tested every three days. Meanwhile, all cleaning and freight transport workers will be strictly monitored.

Waste disposal and disinfection of key areas will be strengthened to prevent spread of the virus, it added.

Anyone wanting to leave Nanjing, either by train, plane or bus, must present a negative result for a test taken within 48 hours.