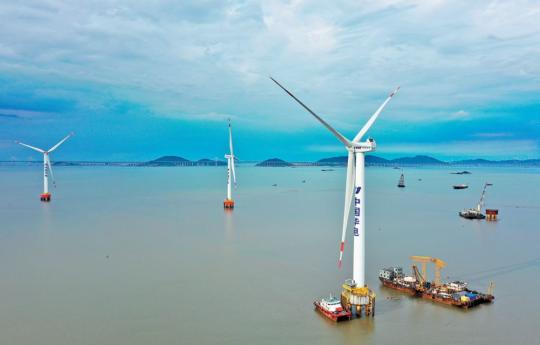 A dual-city mechanism has been adopted for the national carbon trading system. The Shanghai Environment and Energy Exchange is responsible for building the trading system while the China Hubei Emission Exchange in Wuhan, Hubei province, deals with applications.

China's initial carbon trading participants are the 2,225 electricity companies that are registered with the Hubei exchange.

Policies will be introduced to guide companies in such industries to reduce their carbon emissions. Outdated production capacities will be eliminated from the market more rapidly, he said.

Yang Yu, general manager of the research and innovation department at Hwabao Securities, estimated the amount of carbon emissions included in the carbon emissions trading system will increase to 8 billion tons every year with the addition of the eight high-carbon-emission industries during the 14th Five-Year Plan period, which will double the current amount.

Ethan Wang, head of investment strategy for wealth management at Standard Chartered China, said climate change-related topics such as carbon neutrality will be one of the major investment themes in China. The transformation of the country's energy mix will mean clean energies such as wind and solar power will replace coal in electricity generation eventually, he said.

Yin Zhongshu, chief analyst for environmental protection, power equipment and new energy industries at Everbright Securities, said that in the second half of the year, investors can look for opportunities in companies related to the changes that will revolutionize the power industry and related segments, including photovoltaic, new energy vehicles, energy storage and wind power.

As carbon trading matures, new demand for services like consultation, verification, management and market-making will emerge.