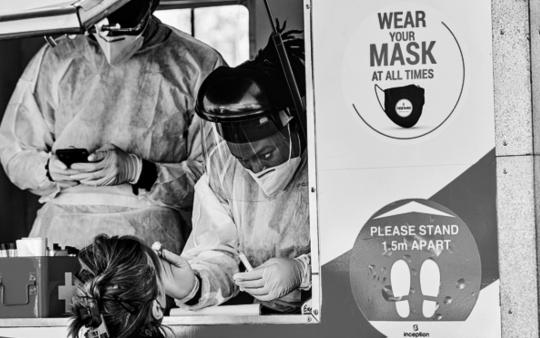 The Delta variant has attributed to surging numbers of COVID-19 infection cases in some African countries, with experts fearing it may bring disastrous consequences to the continent.

According to the World Health Organization, the variant has been reported in three of the five countries reporting the highest caseloads for the week ending on June 27. It is also dominant in South Africa, which accounted for more than half of Africa's cases in the same period.

Sixteen African countries, including nine with surging cases, have reported the variant which is so far the most contagious of all variants.

Jean-Jacques Muyembe, director-general of the National Institute for Biomedical Research in DR Congo, said the Delta variant is responsible for 84 percent of COVID-19 infections in the country.

The Kenya Medical Research Institute warned on Thursday that Kenya is likely to experience a fourth wave of COVID-19 infections from mid-July, fueled by the Delta variant that is already dominant in the western part of the country.

In a study highlighting COVID-19 forecast in the next six months, the state corporation predicted the fourth wave will hit the capital Nairobi and the coastal region hard.

Researchers said the Delta variant is replacing the Alpha variant that was predominant in the third wave. They predicted 4,300 additional hospitalizations and 580 deaths within the next six months.

Apart from the Delta variant, Africa has also reported the Alpha and Beta variants in 32 and 27 countries respectively.

"The speed and scale of Africa's third wave is like nothing we've seen before. The rampant spread of more contagious variants pushes the threat in Africa up to a whole new level," Moeti said.

In the past six weeks, Africa has been recording increased COVID-19 infection cases, rising by 25 percent week-on-week to almost 202,000 in the week ending on June 27.

At the same time, Africa continues to lag behind on COVID-19 vaccination figures. So far, only 15 million people have been fully vaccinated, translating to 1.2 percent of the continent's 1.2 billion population.