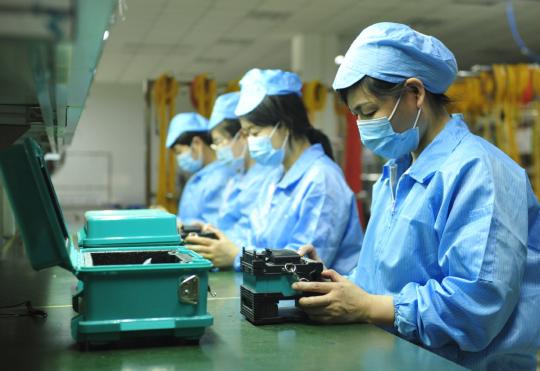 Workers are busy at a telecommunications company in Hejian, North China's Hebei province, on June 30, 2020. (Photo/Xinhua）

China's SMEs- small and medium-sized enterprises－are bullish about their market prospects as various policy moves are standing them in good stead, according to an industry report that received positive comments from experts.

Firm performance in June shows that SMEs are making an increasingly steady and balanced recovery from the effects of the COVID-19 pandemic, thanks to well-targeted policy support and expansion in services-related activities, a Standard Chartered report stated.

The bank surveyed over 500 SMEs for the report. It showed SME activity remained firm in June with continued rebalancing, as evidenced in the headline SME index that stayed flat at 54.4, the second-highest level since the COVID-19 outbreak.

The "current performance" subindex, which gauges the current status of smaller businesses, edged down to 54.9 in June from 55.3 in May; but their expectation of a brighter future has inched up from the May level.

Meanwhile, the indicator for their growth momentum has risen to 9.4 from 8.2. Most sub-indexes also showed that overall, SMEs are more confident about prospects for new business orders now than in the past.

The recovery across industries has become more balanced, and the services sector is catching up with the manufacturing sector, the report showed.

The services sector continued its steady recovery in June while manufacturing eased further, mainly weighed down by the labor-intensive segment of the sector, which saw a slowdown in production. Subcomponents also showed that export orders saw a normalization, while domestic orders improved.

The report also showed SMEs' financial health remained steady as banks' credit lines remained supportive in June. Yet, it also sounded a note of caution as the rise in SMEs' financing costs has accelerated over the past month.

Li Keaobo, a senior researcher at the Academic Center for Chinese Economic Practice and Thinking at Tsinghua University, underlined the significance of smaller firms, saying that going forward, sound and healthy growth of the economy will mainly hinge on their vitality and recovery momentum.

"The steady recovery of smaller businesses in China is mainly attributed to the timely, well-targeted policy support from government authorities, such as waiving rents and providing tax breaks. Such policy moves have particularly catered to the needs of smaller firms, and such support has laid a solid foundation for their recent recovery from the COVID-19 situation," he said.

"On the other hand, with the pandemic situation being well tamped down, demand is also picking up, particularly in services, where smaller businesses take a notable proportion."

Li further said the Standard Chartered survey report also shows the full recovery of smaller businesses will take some more time as some of them are still in need of continued policy support.

Li said: "While financial policies have relatively tightened compared with last year, SMEs' financing costs have edged up, adding to their burden. With economic recovery improving overseas, the number of overseas orders has also declined, while the recent surge in commodity prices has squeezed their profits.

"Continued policy support, particularly in financing, is needed to continue their steady recovery in the second half of this year."