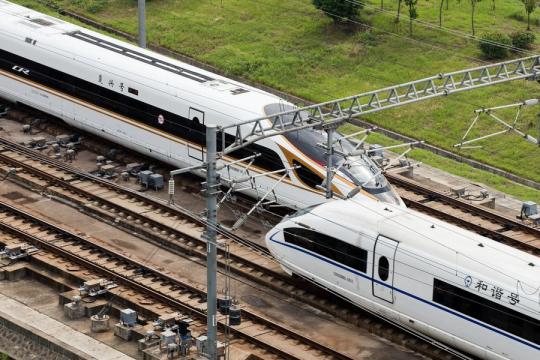 The Beijing-Shanghai High-speed Railway has become an engine driving the economies of areas along the line over the past decade, China Railway Group said on Tuesday.

The line, which opened in June 2011, runs through the provinces of Hebei, Shandong, Anhui and Jiangsu and the municipalities of Beijing, Tianjin and Shanghai, which are among China's most economically vibrant regions and are home to 27 percent of the country's population, China Railway Group said.

"The line accelerated the flow of production factors from the metropolises of Beijing and Shanghai to other cities along the railway and helped realize specialized division of labor in different regions," Yan said. "It also boosted tourism development along the line."

With trains traveling at a maximum speed of 350 kilometers per hour, the line cut the travel time between Beijing and Shanghai to about four hours, down from more than 10 hours.

"Many cities along the line have set up economic zone belts revolving around their high-speed rail stations," Yan said.

"The line helped the capital distribute some functions to nearby areas in Hebei province and helped the Yangtze River Delta region to develop as a whole."

On Friday, the line will start using smart Fuxing bullet trains that can offer better services to passengers.

First used on the Beijing-Zhangjiakou High-speed Railway in 2019 and since revised, the smart Fuxing trains will eventually be used in 18 provincial-level regions across China, the group said.

"The smart trains will improve safety monitoring and the efficiency of troubleshooting along the way," it said. "They also have more comfortable adjustable seats and vending machines."