Nation aims for peaceful use of space exploration 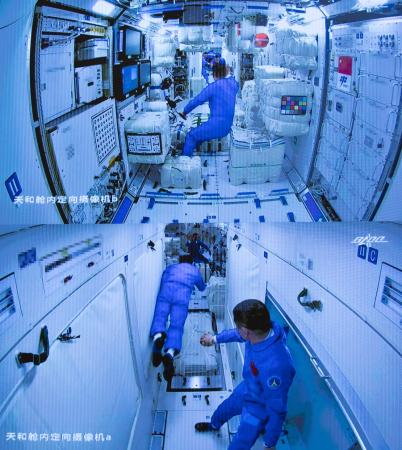 Three Chinese astronauts busying themselves on the new Tiangong, or Heavenly Palace, space station module account for just one of China's achievements in the past six months pertaining to outer space.

In addition to manning the new space station's core module in orbit, China also recently became just the second nation to land a rover on Mars with the Tianwen 1 mission and Zhurong probe. And at the beginning of the year, the Chang'e 5 mission successfully brought back samples of lunar rock.

Furthermore, China and Russia have released a joint road map for building the International Lunar Research Station, which will be the first structures built on the moon, by 2036.

China's space authorities and astronauts have expressed willingness to welcome foreign partners and participation in the new space station, even though China has not been able to participate in the international space station led by the United States since the 1990s, despite Chinese willingness and capabilities.

China's achievements come on the back of a space program that only sent its first astronauts into space in 2003, showing the extraordinary pace of the nation's space exploration.

However, some may interpret China's aspirations in the wrong way, accusing the country of seeking dominance or hegemony in space and being in a "space race "with NASA and the US.

Such interpretations are groundless: China's vision for the exploration of outer space should be understood through the lens of its economic strategy for "peaceful development" and "a community of a shared future" for the good of humankind.

Long before the modern era, Chinese culture and tradition long attached importance to the heavens and the moon, boasting many of the world's earliest astronomers and cosmologists.

While the United States largely perceives expansion into space through the medium of military ambitions, inaugurating its Space Force under the former president Donald Trump's administration, China has a nonmilitary view of space exploration that is attached to the principle of "socialism with Chinese characteristics". It sees advances in science as a means for accelerating global prosperity and economic development.

Since the 20th century, outer space has been the newest frontier of humankind, and understanding it and knowing how to use it productively are crucial for humanity. The advancement of space-related activities has the potential to overcome many problems on Earth itself, including access to energy, resources and protection of the environment.

As a consequence, progress made in space is ultimately progress in the name of all, and serves subsequently to benefit all.

China is a signatory of the Outer Space Treaty of 1967, which explicitly opposes the militarization of space and urges the peaceful use of the cosmos for the common benefit of humankind. This is the direction we must take in what we envision to achieve in the universe.

Each civil feat in space subsequently transforms the way we live, even if we do not realize it. The achievements of the 20th century made by the US and the Soviet Union transformed our world in communications and subsequently expanded our capability to understand ourselves. The invention of the satellite and similar resources has been invaluable in promulgating globalization and interconnectivity.

As a result, the Tiangong space station and the planned International Lunar Research Station will aim to shape the future of humanity accordingly, by expanding the scope of knowledge to new levels.

The Chinese endeavor is not a zero-sum game; China invites all countries to participate and partner in its projects as a peaceful initiative and to help shape humanity's future. It is the United States that stages stringent legal and other barriers to Chinese cooperation in US-led international space programs, or even visits by Chinese nationals to NASA facilities.

The politicization, division and militarization of the cosmos are what divide us as a planet, bringing risks rather than benefits. Thus, regardless of what other countries do, China will pursue the path of peaceful development in space with a view to the moon, Mars and beyond.

With so much still to learn and discover, consequential transformations in how we live and experience the world surely lie ahead but are yet to be envisioned.

The author is a British political and international relations analyst.