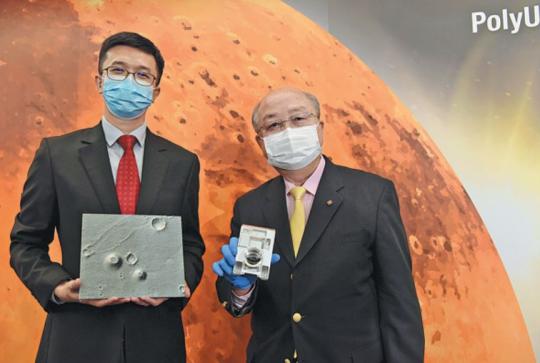 Wu Bo (left) and Yung Kai-leung, both from Hong Kong Polytechnic University, pose for a photo during a media briefing at the university on May 21. Wu helped identify possible landing regions on Mars with advanced mapping technologies. Yung developed a space instrument to capture images of the surroundings on the Red Planet. (Photo by Li Zhihua/China News Service)

Passion and pride have bubbled up among aspiring scientists in Hong Kong, as more researchers in the special administrative region are deeply participating in China's major space exploration projects.

This year, China celebrated a series of milestones in space exploration, from landing a rover on Mars to beginning to build its own space station. Many of these projects have received contributions from Hong Kong-based scientists, known for their world-class research strengths.

Wong Kam-fai, a professor at Chinese University of Hong Kong known for his contributions to information technology, described the opportunities offered by national projects as "a diamond mine" for young people in the Hong Kong SAR who are interested in science careers.

Wong, who is associate dean of external affairs for the university's engineering faculty, recalled the efforts he made two or three decades ago to win a chance to work in programs initiated by the United States or Europe, which then dominated cutting-edge technology.

Now, however, people around the world are seeking to work with China's top teams, he said.

Wong encouraged young people in the region to attempt to better grasp where opportunities might lie in the future.

Wong said Hong Kong's scientific development is hindered by such things as a lack of resources, such as experimental samples. With deeper involvement in national projects and collaboration with other cities in the Guangdong-Hong Kong-Macao Greater Bay Area, he believes the problem can be eased and research can advance further.

Wu Bo, a professor in Hong Kong Polytechnic University's Department of Land Surveying and Geo-Informatics, said he hoped that the good prospects will boost the confidence of Hong Kong's young people in pursuing scientific careers. Wu, leading a team of young scientists, had joined the nation's deep-space exploration efforts, including participation in the Tianwen 1 spacecraft mission that successfully landed a rover on Mars in May.

Wu, a veteran contributor to national space missions, said he has met many aspiring undergraduates who were drawn by his experience with space missions and sought his help with their graduation projects in related field.

He said he hoped that cross-border scientific collaboration and new links to national projects could open up more career options for the city's young people. He said that so far, few have stayed on this track due to intense competition for positions with local research institutions.

Wu also said he hoped that future students interested in science eventually will have more development directions, such as continuing their scientific research, starting a business or participating in major national or international projects.