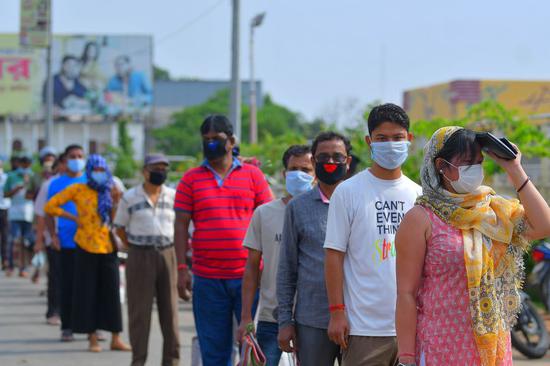 India's COVID-19 surge continues as a fresh high of 200,739 new cases were registered during the past 24 hours, taking the total tally to 14,074,564, said the latest data released by the federal health ministry on Thursday.

This is the first time when the single-day spike of COVID-19 cases has surpassed the 200,000-mark ever since the pandemic broke out in the country. For almost 10 days, the number of daily cases in India had been over 100,000. On Wednesday 184,372 new cases were reported.

There are still 1,471,877 active cases in the country, while 12,429,564 people have been discharged from hospitals after medical treatment.

There was an increase of 106,173 active cases during the previous 24 hours, the highest so far this year.

The number of daily active cases has been on the rise over the past few days, as another wave of COVID-19 looms large in India. In January the number of daily cases in the country had come down to below 10,000.

The nationwide vaccination drive in India was kicked off on Jan. 16. So far over 114.49 million people have been vaccinated across the country.

Meanwhile, 262,003,415 tests have been conducted till Wednesday, out of which 1,384,549 tests were conducted on Wednesday alone, according to the latest data issued by the Indian Council of Medical Research (ICMR) on Thursday.

The national capital Delhi, one of the most COVID-19 affected places in the country, witnessed over 17,282 new cases and 104 deaths through Wednesday. The single-day deaths in Delhi are said to be the highest in over four months.

So far 11,540 people have died in the national capital due to COVID-19, confirmed Delhi's health department