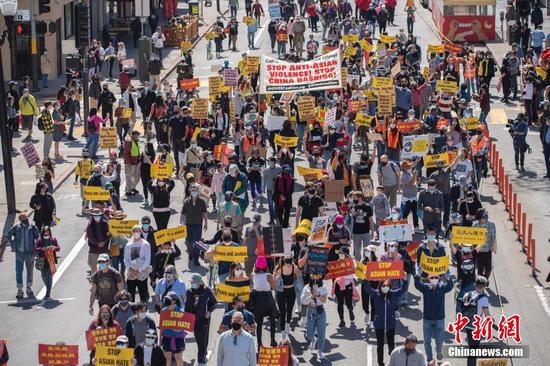 People took to the streets of Los Angles and throughout other major U.S. cities in response to the rise in violence against Asians, March 27, 2021. (China News Service/Liu Guanguan)

Demonizing China might feed U.S. nationalistic impulses, but unhelpful to finding common ground or building the required trust to ensure the peaceful coexistence between the two countries, said a recent opinion piece in the South China Morning Post.

"China-bashing in any form on Capitol Hill inspires actual Asian-American bashing in our streets," said the article published Wednesday.

Multiple rallies have been held recently across the United States against the troubling surge of anti-Asian racism and violence in the country.

Although anti-Asian bias has been around in the United States since its foundation, there has been a surge of hate crimes against Asians nationwide since 2020, particularly after former U.S. President Donald Trump's racist depictions of COVID-19 as the "China virus" and labelling China as aggressive, the article said.

"China is clearly not an aggressor," the article argued, explaining that historically China has been "the victim of aggression by Japanese and Western forces."

Washington has been pushing a narrative that Beijing is aggressive, and has been encouraging other countries to jump on the anti-China bandwagon, it noted. "By presenting China as an aggressor, the United States gives itself cover for taking unilateral actions to try to stem China's rise."

"To criticize China for building up in the South China Sea is like criticising a kid who has been bullied for years for taking some self-defence classes," said the opinion piece.