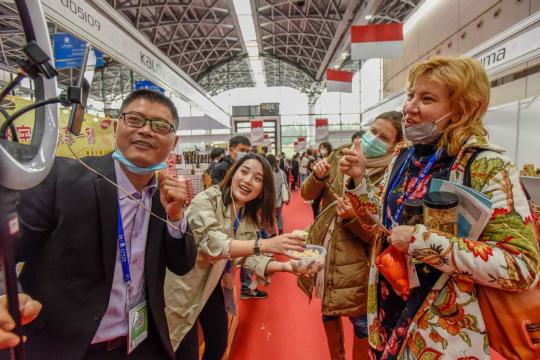 Visitors to the Malaysian pavilion of the 17th China-ASEAN Expo participate in a livestreaming session on Nov 28, 2020. (PENG HUAN/FOR CHINA DAILY)

China's pursuit of high-quality development will open up new export opportunities for other countries, especially in Southeast Asia, analysts said.

The growth model of the world's second-largest economy, together with the country's socio-economic policies, will broaden the export markets of nations in the region, while encouraging them to tread a more sustainable development path, they said.

Bart Edes, distinguished fellow at the Pacific Foundation of Canada think tank in Vancouver, said any significant change in China's socioeconomic policies will "reverberate around the world, and especially close to home, as in Southeast Asia".

"China's embrace of a greener, more sustainable development path will influence what happens in neighboring countries. That is already happening and is reinforced by increasing attention to sustainability on a global scale," Edes said.

High-quality development, which was highlighted in China's 14th Five-Year Plan (2021-25), entails the expansion of domestic consumption, promoting the green transformation of industries and a renewed commitment to low-carbon growth.

During the two sessions－the annual gatherings of China's top legislature, the National People's Congress, and the top political advisory body, the Chinese People's Political Consultative Conference-President Xi Jinping said the country has to step up the green transformation of key industries and areas, foster cleaner production and accelerate green and low-carbon development.

Helena Varkkey, senior lecturer at the Department of International and Strategic Studies at the University of Malaya in Kuala Lumpur, said China's focus on high-quality growth and its huge market can encourage Southeast Asian countries to produce more environmentally friendly products for export to China.

This has added importance as the 10-member Association of Southeast Asian Nations has emerged as China's biggest trading partner, she said.

She said China is presenting a broader narrative of inclusive global development and welfare, and that the country wants the world to understand that what is good for China is also good for everyone.

Such leadership is significant for ASEAN members that have concerns over climate change and had committed to the Paris Agreement, Siriwan said.

She noted that the pandemic has delayed the progress in environmental protection and combating climate change in the region.

China can support ASEAN in this matter as their economies are "highly intertwined", Siriwan said.

Li said China will continue to open up its economy and a growing Chinese domestic market offers "great opportunity for foreign products, services and investment".

Siriwan said increased domestic consumption in China will benefit both China and ASEAN.

She pointed out that some ASEAN countries have lower production costs than China. As such, Chinese consumers will benefit from imported goods from the bloc.

"The economies of China and ASEAN have become increasingly integrated to the degree that China views Southeast Asia as an extension of its industrial and supply chains, and important supplier of semiconductors, electronics, and minerals and other commodities."