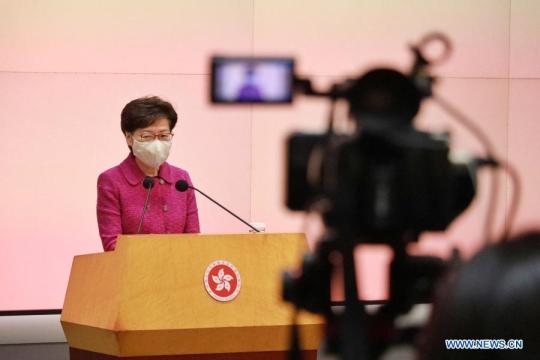 Chief Executive of the Hong Kong Special Administrative Region Carrie Lam attends a press conference in Hong Kong, March 23, 2021. Lam said on Tuesday that the HKSAR government will introduce a bill on improving the electoral system of the HKSAR to the Legislative Council (LegCo) as soon as possible. (Photo/Xinhua)

Their comments came as the United States announced it would step up sanctions against the central government and Hong Kong officials, while British lawmakers pressed Western judges to resign from Hong Kong courts. Both moves are aimed at opposing Hong Kong's actions on national security and local elections.

On March 29 and 30, the Standing Committee of the National People's Congress will deliberate on bills on changing the formation method and selection process of Hong Kong's lawmakers and the committee that elects the city's chief executive. This is to implement the decision of the National People's Congress on March 11 to improve the electoral system of the Hong Kong Special Administrative Region.

At a media briefing on Tuesday ahead of the weekly Executive Council meeting, Hong Kong Chief Executive Carrie Lam Cheng Yuet-ngor said she was delighted that the NPC Standing Committee had made a tight schedule for early implementation of an improved electoral system in Hong Kong.

She dismissed suggestions that the move would damage Hong Kong's rule of law, as some speculated that the 14 overseas nonpermanent judges who serve on the Court of Final Appeal raised concerns over planned improvements to the city's electoral system and the enactment of the National Security Law for Hong Kong in June 2020.

Lam cited an article written by Jonathan Sumption, one of 14 nonpermanent judges on Hong Kong's top court. In a letter to Britain's The Times newspaper published on Thursday, Sumption made clear he would continue serving and urged the UK to "avoid undermining the independence of the judiciary in Hong Kong".

Lam reiterated that Hong Kong courts exercise judicial power independently, without any interference from either the central government or the local administration.

Separately, in a face-to-face interview with China Daily on Friday, Secretary for Justice Teresa Cheng Yeuk-wah called on everyone in Hong Kong to call for a halt to the groundless defamation of the reputation of Hong Kong's rule of law.

Some opposition groups and figures in Hong Kong, including several former lawmakers, have been lobbying certain Western countries to sanction the city or even China, claiming that the rule of law and the "one country, two systems" principle have been undermined.

"That's not something that is a reflection of the patriotism of being a Legislative Council member," Cheng said. This is why "there is really a need for improvements to be made to the electoral system", to ensure those in power are really patriotic, she added.

Similarly, just as time has proved that the security law has restored stability and order to the city, it will eventually be proved that the improved electoral system will bring rationality and good governance back to the city's legislature as lawmakers discuss livelihood-related issues, Cheng said.