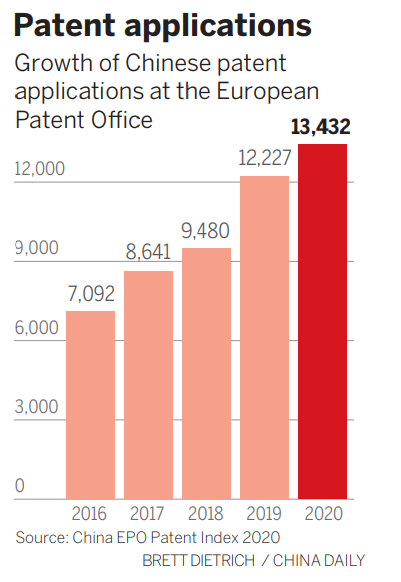 Chinese companies filed more European patent applications in 2020 than in the previous year, with the year's growth of nearly 10 percent taking the level to a new high, despite COVID-19 pandemic disruption, a new report has found.

On Tuesday, the European Patent Office, which is also known as the EPO, published its Patent Index 2020, which showed patent applications from Chinese inventors amounted to 13,432 last year, an increase of 9.9 percent year-on-year. It was the highest growth rate among the 10 leading patent-filing countries.

EPO President Antonio Campinos said: "In terms of European patent applications filed, Chinese companies again showed the strongest growth among leading countries at the EPO last year. Despite the challenges of 2020, Chinese firms were able to increase their patenting activities in a growing range of technologies. That is good news because innovation, supported by a strong patent system, is more important than ever for making our world healthier, safer, and more sustainable, and in driving economic recovery."

Among the leading technical fields across all countries at the EPO, pharmaceuticals and biotechnology showed the biggest increases in terms of patent filings, with 10.2 percent and 6.3 percent rises, respectively. Medical technology (up by 2.6 percent) accounted for the most inventions in 2020, amounting to a total of 14,295 patent applications and retaking the top spot from digital communication, which had been the most active field in 2019. Meanwhile, transport showed the largest drop of 5.5 percent.

The top three technology fields with the most patent applications from China were digital communication, with a 26.5 percent sector share of all applications received at the EPO in that field from all countries, computer technology (11.6 percent share), and electrical machinery, apparatus and energy (9.1 percent share).

In 2020, the technology fields with the strongest growth from China, albeit from lower numbers of patent applications, were biotechnology (up by 75 percent), organic fine chemistry (up by 50.9 percent), and medical technology (up by 34.4 percent). This development shows that Chinese companies are becoming increasingly active in patenting inventions in a diverse range of technologies, the report noted.

While Huawei and Oppo filed fewer applications than in 2019, Xiaomi, BOE, and ZTE filed considerably more patent applications compared to the previous year.

In the overall company ranking, Huawei was the second-largest patent applicant at the EPO in 2020, behind Samsung and ahead of LG.For the first time, all of China's five most highly-ranked companies were also placed among the 50 largest patent applicants at the EPO, confirming that the patent portfolio of technologies coming from China is broadening, the report said.