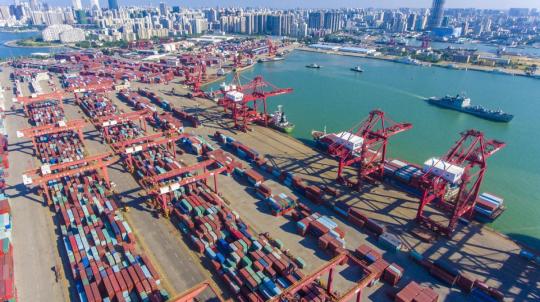 China was confirmed to have been the only major economy that expanded in the crippling pandemic year of 2020, and it also sustained its growth momentum in February, making it a key engine of global economic rebound, officials and experts said on Sunday.

With an annual growth of 2.3 percent, the Chinese economy was the world's only major economy to have avoided contraction in 2020. Its 101.6 trillion yuan ($15.7 trillion) GDP is estimated to account for more than 17 percent of the world's economy, the National Bureau of Statistics said on Sunday.

"The world's second-largest economy has surprised the world with a V-shaped recovery and has become a major driving force of global economic recovery," said Sheng Laiyun, deputy head of the NBS, on Sunday.

China's achievement has helped stabilize the global supply chain as the country strengthened international cooperation instead of using the pandemic to take advantage of its economic heft at the expense of others by resorting to protectionism, officials and experts said.

"Trade protectionism and unilateralism prevailed last year, and economic globalization has encountered major challenges. Amid the changing global situation, China's door to the outside has not only remained open but has opened even wider," Sheng said.

The country has taken the initiative in strengthening international cooperation in fighting COVID-19, with exports of 224.2 billion protective masks from March to December last year, while taking part in economic globalization, Sheng said.

In 2020, China joined 14 other economies in signing the Regional Comprehensive Economic Partnership, the world's biggest free trade bloc, and it concluded negotiations for a bilateral investment deal with the European Union, he said.

"With life and production in many countries affected by the COVID-19 pandemic, China, whose work and production have resumed, has played an irreplaceable role in global production and transportation," said Bai Ming, deputy director of the Ministry of Commerce's International Market Research Institute.

As China's foreign trade and use of foreign capital increased and bucked the global decline last year, the nation has become a stabilizer of international economic cooperation, Bai said.

Liu Chunsheng, an associate professor of international trade at Central University of Finance and Economics, said, "It would be irresponsible to say that China has used COVID-19 as a chance to elevate its global economic heft, as its people have suffered deeply from the virus like the rest of the world and as the country has promoted global recovery by advocating multilateralism."

Despite positive whole-year growth of 2.3 percent in 2020, the figure was less than half the 2019 GDP figure of 6 percent and came after a deep contraction of 6.8 percent year-on-year in the first quarter of last year, Liu said.

Liu said China's economic recovery is expected to continue to drive the world economy, as the country's vast market injects more momentum into the pickup in global demand, while its comprehensive supply system facilitates the restoration in global output.

China's economy has sustained its expansion in the first two months of the year, as the purchasing managers index of the manufacturing sector came in at 50.6 in February, versus 51.3 in January, with figures above 50 separating expansion from contraction, according to the NBS.

NBS figures also indicate that factors to underpin sustainable, high-quality economic growth are on the rise. The country's expenditures on research and experimental development activities amounted to 2.44 trillion yuan last year, up by 10.3 percent year-on-year, the bureau said.