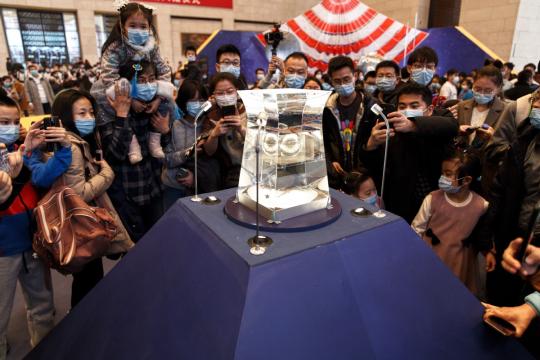 Visitors crowd around Lunar Sample 001, which is on display at the National Museum of China in Beijing, on Feb 27, 2021. (Photo by Jiang Dong/chinadaily.com.cn)

A 100-gram sample of lunar soil was added to the collection of the National Museum of China on Saturday and unveiled for public viewing.

It was among nearly 2 kilograms of lunar samples retrieved by China's Chang'e 5 mission late last year.

Chang'e 5, launched from the Wenchang Space Launch Center in Hainan province on Nov 24, touched down on the moon on Dec 1. The 23-day mission, which brought back lunar rocks and soil, was China's first such space endeavor.

The lunar soil is on display inside a specially designed transparent container at the museum. The synthetic quartz vessel replicates a zun, a bronze wine holder often used at rituals in the Shang (c.16th century-11th century BC) and Western Zhou (c.11th century-771 BC) dynasties.

The container is 38.44 centimeters tall, representing the average distance from Earth to the moon of 384,400 kilometers. The soil fills a globe, symbolizing the moon, in the center of the container, which has a map of China at the base.

The sample is at the heart of an exhibition on the National Museum's ground floor that opened on Saturday and charts China's progress in space missions, especially lunar exploration.

In addition to the soil, the exhibition features dozens of objects, photos, videos and publications.

Highlights include the return capsule and parachute of the Chang'e 5 probe, as well as life-size models of its ascender and lander.

A model of the rover to be deployed by China's first Mars mission, Tianwen 1, is also being shown.

Wang Chunfa, the director of the National Museum, said at the opening of the exhibition that the museum has paid great attention to building a collection of objects showing China's major breakthroughs in science and displaying them.

He said the exhibition was mounted to celebrate this year's centenary of the founding of the Communist Party of China.

"The exhibition is to ignite people's interest in science … and to inspire people to dream, create and strive for the Chinese dream of national rejuvenation," Wang said.

The museum has assembled dozens of objects related to China's space adventures, including the spacesuit worn by Yang Liwei, China's first astronaut.

It also has a long-term online exhibition－Dongfanghong Forever－that charts China's progress in aerospace technology in the past half century.

Bian Fangyue, a student at Beijing No 4 High School, was among the first members of the public to view the lunar soil.

"Chang'e 5 is a project of sophistication, and retrieving lunar soil marks a great leap in our nation's scientific development," he said. "I feel honored to be living in an era that has witnessed an achievement like this."

The National Museum has not said when the exhibition will end, but Wang said it will tour the country in the future.