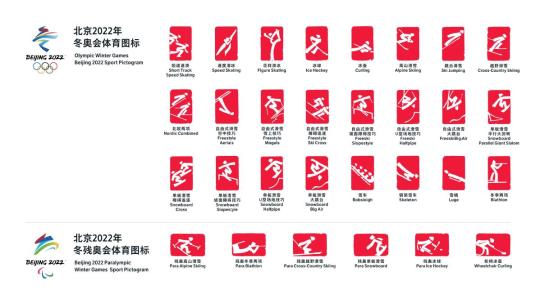 Beijing capped its preparation for the 2022 Winter Olympics in 2020 with an indelible mark on Thursday by releasing the official sports pictograms inspired by traditional Chinese seal engraving.

Witnessed by sports and entertainment celebrities from across the country, the Beijing Organizing Committee for the 2022 Olympic and Paralympic Winter Games unveiled the pictograms during a televised countdown party on New Year's Eve as a major milestone in its preparation with co-host city Zhangjiakou, North China's Hebei province, for the winter sports gala in 2022.

The set of pictograms consists of 24 icons representing all 109 events across seven sports at the Winter Olympics and six symbols identifying all the sports at the Paralympic Winter Games in 2022.

Designed based on traditional art form of seal engraving, each of the pictograms depicts a respective event with unique strokes - as those carved with a knife on Chinese seals dating back to the Qin and Han dynasties - that embody the motion of winter sports and rich Chinese culture in modern graphics.

Using sharp contrast between the red background and white strokes, the pictograms highlight the dynamic and graceful action of winter sports, while adding to the festival vibe during the Games, which will run overlapped with the Chinese Lunar New Year in 2022.

"The release of the sports pictograms marks the progress of our preparation for the 2022 Olympic Winter and Paralympic Games over the past year in a visually strong fashion," said Gao Tian, deputy director of the Culture and Ceremonies Department of the Beijing 2022 organizing committee.

"It set another example of presenting time-honored Chinese art in a modern way while integrating the quintessence of Chinese culture into sports presentation on the Olympic stage," she said.

As one of the main image elements of the Olympics, the pictograms are widely applied in areas such as event signposting, advertising, communications, TV broadcasting and souvenir design. In addition to their traditional context, the sports pictograms must primarily function flawlessly as a simple, internationally understandable representation of the respective sport, as has been the case for all the Olympic Games for decades.

The 2022 pictograms were developed in line with the style of the Games' emblems designed by the same group led by Lin Cunzhen, an associate professor at the China Central Academy of Fine Arts, while drawing inspiration from those used at the 2008 Summer Games, which also incorporated the art of calligraphy into the sports logos.

"We designed the 2022 pictograms based on two principals - to stay consistent with the Games' entire visual appearance and to echo the design used at the 2008 Summer Olympics to highlight Beijing's unique status as the world's only city so far to host both Games," said Lin, who also is an art director with Beijing 2022's Culture and Ceremonies Department.