Key groups to get vaccine before festival 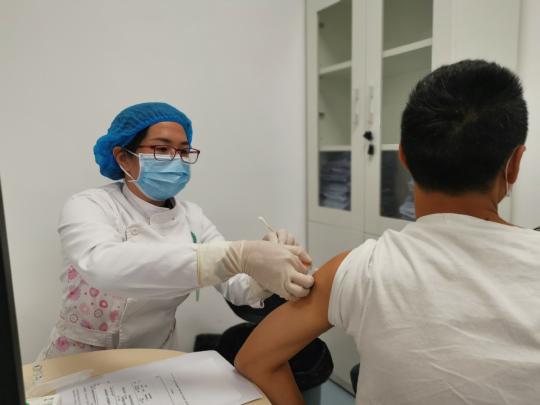 Beijing announced on Thursday that nine key groups of individuals will receive COVID-19 vaccines before the Spring Festival in February.

They include quarantine inspection workers at customs dealing with imported cold-chain products, porters at entry ports and those who work in the industries of international and domestic transportation.

Individuals who will travel abroad for work and personal reasons, medical workers and government department workers are also included.

The country's top health authority said ahead of the festival that family gatherings during the upcoming New Year holiday and the Spring Festival are suggested to be limited to 10 individuals,

Moreover, people with flu symptoms are suggested not to participate in order to improve COVID-19 prevention and control, the authority said after a sharp rise in the number of cases reported in China in December.

The authority also encouraged employers to adopt flexible holiday arrangements for their employees and encouraged individuals to minimize travel and to spend the holidays in the city where they work.

Altogether 113 domestically transmitted confirmed COVID-19 cases were reported from Dec 1 to 30, up from around 60 all of last month, according to the commission.

Dalian city government released a letter to its residents on Thursday, calling on them to beef up personal and family protection measures and urging them not to leave the city if unnecessary.

"The current situation is generally within control, but uncertainties and risks still exist and the city is at a critical stage of epidemic prevention and control," read the letter.

Also, a psychological assistance hotline has been put into operation in Dalian.

Experienced counselors offer help around the clock to residents suffering from mental distress caused by the pandemic.

Shenyang has tightened its measures to curb the virus' spread this week following new reports of local infections. All extracurricular training institutions have been ordered to suspend offline activities since Tuesday and kindergartens were suspended temporarily as well.

The city also said that personnel and working sites of cold-chain logistics will be subject to nucleic acid tests every three days, and the tests will also be applied regularly to staff and venues related to farmers' markets and the express delivery and transportation industries.

In Shanghai, where no COVID-19 case has been reported in December, the health authority still encouraged residents with chronic diseases, the elderly, children and pregnant women to avoid public gatherings during the holiday.

"Using a spoon to serve food and eating with separate utensils can help protect people from infection at gatherings, which should be well ventilated," the Shanghai Health Promotion Center said on Thursday.

"But we need to reiterate the importance of continuing to wear masks, keep social distance and maintain good personal hygiene to individuals having been vaccinated. So far the protective effect of any vaccine cannot reach 100 percent," it said.