CE: No one is above the law, including lawmakers 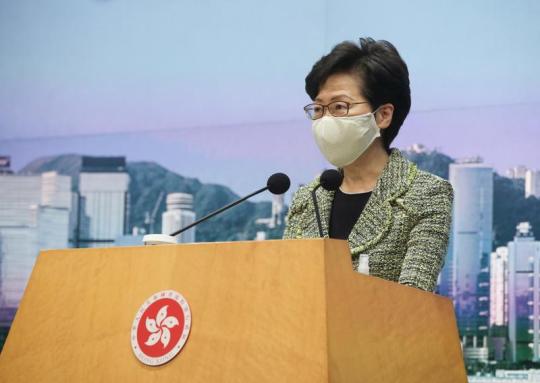 Chief Executive Carrie Lam Yuet-ngor stressed on Tuesday that everyone is equal under the law, including lawmakers.

She made the remarks in a morning press briefing after eight Hong Kong opposition political figures, including five incumbent legislators, were arrested on suspicion of breaching the Legislative Council (Powers and Privileges) Ordinance, after a legislative meeting descended into chaos in May.

There is no piece of legislation saying that legislators cannot be subject to the law, Lam told a weekly news briefing ahead of an Executive Council meeting.

"If there is legal provision and sufficient evidence to demonstrate that certain individuals, including lawmakers, have breached the law, then there is a case to answer," Lam said.

She continued that any prosecution by the Department of Justice will based on the law, and will not be affected by any political or personal interference.

She cited the case of Leung Kwok-hung, a former opposition lawmaker who was also charged of breaching the powers and privileges ordinance for snatching a document of a government official in 2016.

Separately, Lam called on the next U.S. administration – whoever wins Tuesday's presidential election in the United States – to comprehensively consider the relationship with Hong Kong, and not willfully hurt the interests of Hong Kong-based American firms to achieve political goals.

Lam said that Hong Kong-U.S. ties have long been reciprocal and the city's robust financial industry has benefited the U.S.