Cargo train in first with arrival at Moscow hub 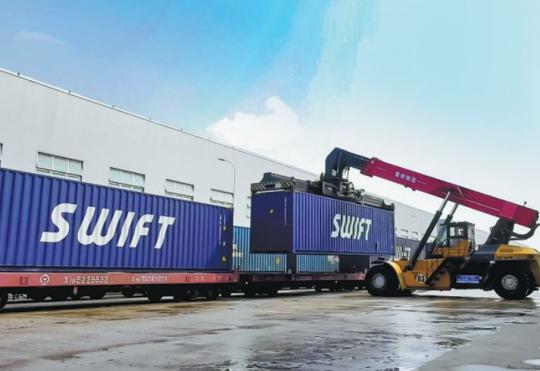 A container is loaded onto a China-Europe freight train at the Shenyang railway logistics center owned by Liaoning Port Group, a subsidiary of China Merchants Group, in Shenyang, Liaoning province, in July. [Photo by Ning Yong/For China Daily]

The first freight train from China bound for a major logistics center in Moscow arrived in the Russian capital on Thursday, heralding a boost in rail-borne trade between the two countries.

The train left Shenyang, the capital of Northeast China's Liaoning province, on July 3, with its final destination the Berelast Logistics Center. The journey marked the start of regular rail freight services between Shenyang and Moscow using the Berelast complex.

It carried auto parts, chemicals, mechanical equipment, along with 300,000 masks donated by the commercial department of Liaoning province and other institutions in Shenyang.

"The running of the freight train adds significant meaning to the bilateral cooperation between China and Russia," said Xu Song, deputy general manager of the Liaoning Port Group."With the role of the Berelast Logistics Center on the Russian side, it becomes the first project implemented under the coordination between China's Belt and Road Initiative and the Russialed Eurasian Economic Union."

The complex was jointly built by the Liaoning Port Group and Russian Railways and since 2017 has served as a major logistics infrastructure cooperation project between the neighbors.

The first phase of the center was completed this year, enabling the start of services on the China-Europe freight train, Xu said.

To boost trade between Russia and Northeast China, Liaoning will accelerate the construction of a green customs clearance pilot project between the two countries, according to Song Yanlin, director-general of Liaoning's commercial department.

The China-Russia rail link is an important component of a grand plan for expanding freight services between China and Europe. This goal was initiated in 2011 and is considered a significant part of the Belt and Road under the plan to increase trade between China and the countries participating in the initiative.

According to a statement by the National Development and Reform Commission in July, China has allocated 200 million yuan ($28.3 million) from the central budget to support the construction of transportation hubs in five cities: Zhengzhou, Chongqing, Chengdu, Xi'an and Urumqi. The work is being undertaken to improve the efficiency of the transportation network for the China-Russia and China-Europe freight services.

Oleg Belozyorov, president of Russian Railways, said the freight train from China traveled 1,300 kilometers a day on its way to Moscow, taking less than five days to arrive at the station in the Berelast center from the Russian-Mongolian border,

"This creates a huge advantage for Russia in international cargo transportation," he said, adding that the rapid development of the Russian logistics center will increase efficiencies while reducing the cost of freight coming from China.

In July, the center handled 5,700 twenty foot equivalent units of freight. That number is expected to reach 700,000 TEU a month in the future, he said.