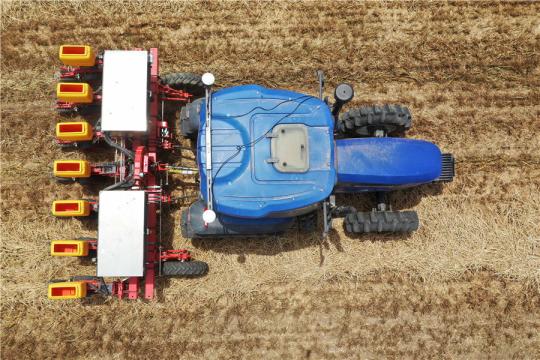 An unmanned tractor equipped with a Beidou navigation system sows a new crop in the village of Anzhong in Dengzhou, Henan province, on May 26. The system has helped boost productivity in many areas. (FENG DAPENG/XINHUA)

China's domestically developed Beidou Navigation Satellite System has been widely used in many public sectors and business fields at home and abroad, according to the China Satellite Navigation Office.

By the end of 2019, more than 100 million Beidou-based navigation chips, modules and other products had been sold.

The system had by then been applied to nearly 6.6 million taxis, buses and trucks around China as well as more than 70,000 fishing vessels across the country. More than 10,000 fishermen had been rescued or received assistance after they used a Beidou device to ask for help.

Beidou-enabled functions are also used in at least 50,000 agricultural machines and have improved their operational efficiency.

More than 70 percent of mobile phones registered in China are compatible with Beidou signals.

In the public security field, more than 400,000 portable terminals used by the police across the country have Beidou-enabled positioning functions. Beidou has also played important roles in security work for high-level events such as the Asia-Pacific Economic Cooperation summit in Beijing in 2014 and the Group of 20 Summit in Hangzhou, Zhejiang province, in 2016, the office said.

According to the Global Navigation Satellite System and Location-Based Services Association of China, Beidou has been used in dozens of business and public sector fields in China, including transportation, electric power transmission, fisheries, mining and agriculture. Tens of millions of Beidou-based terminal devices have been sold and are in use.

Globally, by the end of 2019, Chinese products based on Beidou had been sold to more than 120 foreign countries and regions, playing a helpful role in a number of public sector fields.

Beidou had by then been used in land ownership investigations, smart agriculture and intelligent construction, as well as other businesses in Asia, Europe and Africa, the association said.

For instance, Beidou has helped Russia improve its electric grid inspections, made operations more convenient for unmanned aircraft users in Cambodia, boosted management efficiency of many warehouses in Thailand and facilitated construction work in Kuwait.

In China, the overall value of satellite-enabled navigation and positioning services in 2019 was 345 billion yuan ($48.8 billion), a 14.4 percent increase year-on-year.

More than 500,000 Chinese people work at about 14,000 domestic institutes and companies doing business related to Beidou and other satellite navigation and positioning services, according to the association.