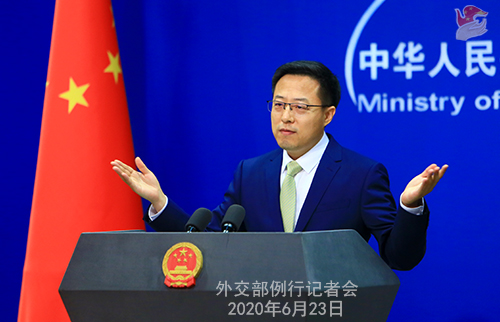 China and India have agreed to take measures to ease tensions along the border area at commander-level talks between the militaries of the two sides, the Foreign Ministry said on Tuesday.

The commanders reached the agreement on Monday in their first meeting since a clash between Chinese and Indian troops at the border area in the Galwan Valley on June 15. This is also the second commander-level dialogue between the two nations since they have been locked in border tension since May. The first dialogue was held on June 6.

Ministry spokesman Zhao Lijian said at a daily news briefing that the two sides "had a frank and in-depth exchange of views on the prominent issues" on border control and agreed to take necessary measures to cool down the situation.

Both countries also agreed to maintain dialogue and work together to promote peace and tranquillity in the border area, he said.

The meeting has shown that China and India hope to manage their differences and de-escalate tension through negotiation, he added.

Zhao denied speculation in media reports that said at least 40 Chinese troops had died in the June 15 clash, saying "it is false information".

In another development on Tuesday, State Councilor and Foreign Minister Wang Yi called on China, Russia and India to correctly face and properly handle the sensitive factors in bilateral relations and maintain the overall situation of their ties.

He made the remark in a videoconference of foreign ministers from the three countries.

"New Delhi and Beijing have shown commitment to a peaceful resolution. They started meetings at the level of defense officers and foreign ministers and neither has made any statement to indicate either will pursue nondiplomatic solutions," Asian News International quoted Russian Foreign Minister Sergei Lavrov as saying.