CBA gets creative for new tipoff 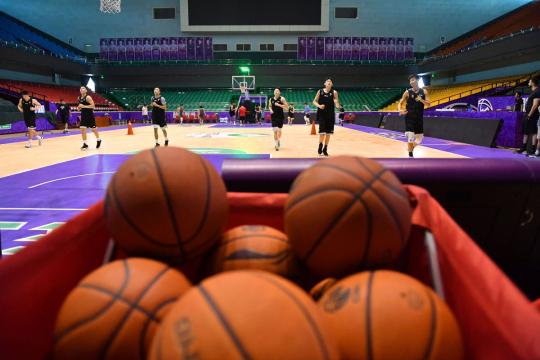 Shandong players train ahead of the CBA's return to action. The league has been suspended since January due to the COVID-19 pandemic but will resume on June 20 behind closed doors in Qingdao, Shandong province, and Dongguan, Guangdong province. XINHUA

The wait is over, yet questions remain as the Chinese Basketball Association makes its long-awaited comeback from the COVID-19 shutdown.

The ongoing pandemic has forced sports competitions worldwide to improvise with their restart initiatives, with the CBA's reshape of its 2019-20 season looking like one of the more intriguing formats to follow as it attempts to cram in an overloaded schedule and mitigate against a lack of foreign players.

As the first of China's major sports leagues to return, maintaining ultra-vigilance against the virus, of course, remains a top priority.

According to the plan, announced last week, the league will resume play on June 20 in two host cities－Qingdao in Shandong province and Dongguan in Guangdong province, where strict testing, isolation and hygiene measures have been prepared at player hotels, training facilities and competition venues, which will only allow access to essential game personnel.

Based on their rankings after the last round that was played on Jan 24, the 20 teams will be divided into two pools, with the top team (Guangdong) going to Group A, the second-place team (Xinjiang) in Group B, the third-place (Liaoning) team to A, and so forth.

With games played in empty arenas and covered only by a limited number of media staff, each team will have to play half of their 16 remaining regular-season games during a 15-day Phase One of the restart. Clubs will then reconvene for Phase Two hosted by as-yet undecided third city to close out the remainder of the regular campaign by late July.

The top 12 teams will qualify for a truncated postseason, with the first two playoff rounds contested as one-off games before the semifinals and finals, which have been shortened from their usual best-of-seven format to best-of-three.

With multiple games aired every day over two months, the rescheduled season's unpredictable format promises to spring plenty of surprises for hoops-starved fans.

CBA chairman Yao Ming, however, is keeping his excitement in check after months of painstaking preparations to get to this point.

"Even now I don't feel relieved at all," Yao told media after the restart announcement last week.

"The restart was only possible because of teamwork that takes so much effort from everybody involved," added the 39-year-old Basketball Hall of Famer.

"We've encountered a very tricky situation this year, with so much unknowns beyond our experience. It's time for us to carry out the plans prudently and try to make it fair enough for every team."

The CBA's return from the pandemic comes after months of meticulous planning and consultation with the country's sports governing body, health authorities and infection control experts.

Attempts to restart the league have been postponed several times due to the country's vigilant infection-control strategy, until a breakthrough finally arrived at the end of May, when China's domestic outbreak was deemed to be sufficiently under control.

Each team has now begun the first of three rounds of coronavirus testing before the new tipoff. Upon arrival at host cities Qingdao and Dongguan, players will follow strict isolation and hygiene rules according to a master plan developed with the help of Dr Zhong Nanshan, China's top respiratory expert who has played a key role in the battle against the disease.

Although facing a tough task－both physically and mentally－to get back into game shape, players and coaches across the league have widely welcomed the return.

"I'm looking forward to the return of the CBA. Fans hope to watch the games. Regardless of the format or whether it is behind closed doors, we just want to play and offer fans matches to watch," said Lin, a former NBA star who joined the three-time CBA champion franchise last year.

Without actual games to play over the past few months, most teams have kept their players busy with behind-closed-doors training programs.

Yet many coaches admit the intensity of playing a condensed schedule after such a long break will inevitably bring heightened injury risks for most players.

"During the lockdown period, we maintained some basic training focusing on improving players' technique and fitness," said Wang Han, coach of the seventh-ranked Jilin Northeast Tigers.

"After the league's resumption was confirmed, we made adjustments to our training plan to focus on team drills and to level up the intensity in training for the next two weeks," he added.

Due to China's temporary entry ban on foreign nationals since late March to control imported infections, 10 CBA teams haven't called back any of their foreign players so far while some foreign coaches, such as the Ducks' Greek boss Yannis Christopoulos, are also stuck overseas, leaving them with no option but to field all-Chinese rosters for the restart.

In order to make things fairer, the league has adjusted its import policy to limit teams to having one foreigner on the court against opponents who are fielding all-Chinese lineups. Otherwise, the original rule of two foreigners on court per game will be observed.

The absence of the foreign stars, mostly former NBA players, is expected to deprive the league of a little of its luster but some teams are embracing the challenge.

"Challenge goes along with opportunity for us. Without foreign players, our domestic players could play more minutes in critical moments on court, which will be a valuable experience for them to grow," said Wang Fei, coach of the 10th-ranked Shanxi Loongs.

"I hope that domestic players can rise to the challenge to shoulder more responsibility."