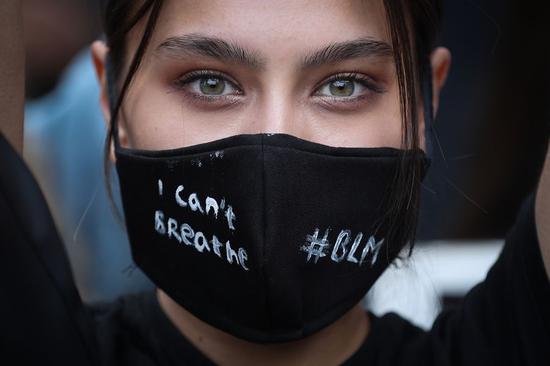 On Saturday, tens of thousands of people took to the streets of European cities like Berlin, Paris, Munich, Hamburg, Frankfurt, Dublin and Prague in support of the "Black Lives Matter" movement, which has swept the United States and other countries worldwide following the U.S. police killing of George Floyd, an unarmed African American.

Floyd, 46, died on May 25 in the U.S. city of Minneapolis after a white police officer knelt on his neck for nearly nine minutes while he was handcuffed facing down and repeatedly said he couldn't breathe.

In Brussels, home to the European Union headquarters, more than 10,000 people demonstrated on Sunday afternoon at Place Poelart in the city center. Protesters of all ages and ethnic backgrounds came from all over Belgium, chanting "Black Lives Matter," "No Justice, No Peace."

Their banners and placards read -- "The Police Kill, it's written white on black," or "We can't breathe," echoing the last words of George Floyd.

"The murder of George Floyd has visibly awakened many people," newspaper Brussels Times quoted Ange Kazi, spokesperson of the Belgian Network for Black Lives Matter, which called for the protest, as saying. "Many people are fed up with police violence, which systematically affects Blacks," she said.

In the Danish capital of Copenhagen, more than 15,000 protesters gathered peacefully in front of the U.S. embassy on Sunday afternoon, shouting slogans and holding banners as part of the Danish "Black Lives Matter" demonstration.

After demonstrating in front of the U.S. embassy for about an hour chanting "I can't breathe", demonstrators marched through central Copenhagen, in the vicinity of the iconic Little Mermaid, along Kongegade street, before arriving at Christiansborgs Slotsplats, home of the Danish parliament, for speeches.

In Spain, thousands of people added their voices to the "Black Lives Matter" protests worldwide. According to Spanish TV station RTVE, an estimated 3,000 people took part in a demonstration in Madrid, which began outside the U.S. embassy.

The Spanish Government Delegate had given permission for 200 people to participate in the protest, but far more people than expected turned up to show their support, as also happened in other European cities.

A further 3,000 people also marched in Barcelona for the same cause. There were also demonstrations in cities such as Bilbao, San Sebastian and Vitoria in the Basque Region of northern Spain, as well as in Logrono and Murcia.

In the Hungarian capital Budapest, more than 1,000 people gathered at a peaceful demonstration in front of the U.S. embassy. Almost all of the protesters wore masks. The police presence was strong, but they did not intervene.

Demonstrators, mostly young Hungarians, held up banners reading "Black Lives Matter" at the front of the demonstration. Other banners displayed messages such as "Police everywhere -- justice nowhere" or "No Justice -- No Peace."

After the speeches and music, protesters knelt in silence for eight minutes and 46 seconds, the time it took for Floyd to lose consciousness as the police officer knelt on his neck.

UK ON SECOND DAY OF PROTESTS

Across the English Channel, tens of thousands of people joined a second day of protests in British cities -- including London, Manchester, Cardiff, Leicester, Bristol and Sheffield -- despite officials advising against mass gatherings due to coronavirus.

Thousands of people gathered in London, the majority donning face coverings and many with gloves, BBC reported.

In one of the protests which took place outside the U.S. embassy in central London, protesters dropped to one knee and raised their fists in the air amid chants of "silence is violence" and "color is not a crime," the report said.

In other demonstrations in London, some protesters held signs that made reference to coronavirus, including one which read: "There is a virus greater than COVID-19 and it's called racism." Protesters knelt for a minute's silence before chanting "no justice, no peace" and "black lives matter," BBC said.

In the southern British city of Bristol, a statue of a 17th-century slave trader was pulled down by "Black Lives Matter" protesters.

Footage on social media showed demonstrators tearing the figure of Edward Colston from its plinth during protests in the city center. In a later video, protesters were seen dumping it into the Avon River.

The bronze statue of Colston, who worked for the Royal African Company and later served as the Tory MP for Bristol, had stood in the city center since 1895, and has been the subject of controversy in recent years after campaigners argued he should not be publicly recognized by the town.

Protester John McAllister, 71, told local media: "The man was a slave trader. He was generous to Bristol but it was off the back of slavery and it's absolutely despicable. It's an insult to the people of Bristol."