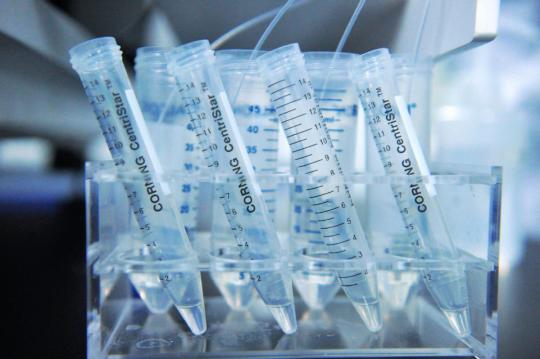 A gene sequencer is in operation at a BGI Genomics facility in Qingdao, Shandong province, on May 29, 2018. [Photo/Asia News Photo]

Mao said one solution would be to establish a multitier ethical review system covering regulatory bodies at different stages－from local institutions to the national level－that could grant approval appropriately, based on the ethical risks of the experiment.

With such a system in place, local hospitals, such as the one in which He forged his ethics approval, would not have the power to green light experiments as risky and controversial as the gene editing of human embryos.

Such approval should only come from the highest authority, Mao said.

"In China, the current bioethical standards for children, adults and seniors are all the same, but in reality, these people can have very different needs and concerns," Mao said.

The Beijing government is testing a diversified ethical standard at The Beijing Hospital by allowing its ethical review board to create specific ethical rules for senior citizens, she added.

Qiao Jie, a noted specialist in reproduction and president of No 3 Hospital of Peking University, said scientists should not break ethical norms or laws during research.

"Genetic engineering has a wide application in disease treatment, plant and crop breeding, and in finding biological targets for drugs," she told Xinhua News Agency in a commentary about the civil code last year.

"But the technology's use in assisting human reproduction is far from mature and requires further research. More important, the technology must be recognized by the public before implementation."

Mao said that in addition to regulation and supervision, ethical education for researchers is also important. "Speaking from personal experience, our scientists' understanding of ethnical research design and practice has seen a noticeable improvement in the past two years," she said.

According to a 2018 survey by the China Association for Science and Technology, nearly 90 percent of the 12,332 scientists surveyed said they believed unethical practices are deeply harmful, though many Chinese scientists still lack knowledge in areas such as bioethics, animal rights and environmental impacts.

In June last year, the General Office of the Communist Party of China and the State Council, China's Cabinet, published a joint guideline that ordered scientists to uphold ethical research practices and improve education on the promotion of scientific integrity and moral standards.

In an analysis of the guideline last year, Wang Zhigang, minister of science and technology, said excellent research practices and a good academic atmosphere are the "lifelines of quality science" that can make or break a project.

"They are also the foundation of building an innovative country and a global scientific and technological powerhouse," he said.

Armed with a series of new guidelines and regulations from various levels of administration, Wang said China will substantially improve its ethical practices and academic environment within three years.

"We hope the scientific spirit can flourish in our society, so more people will respect knowledge, innovation and talent, and more youngsters will dedicate themselves to scientific undertakings," he said.