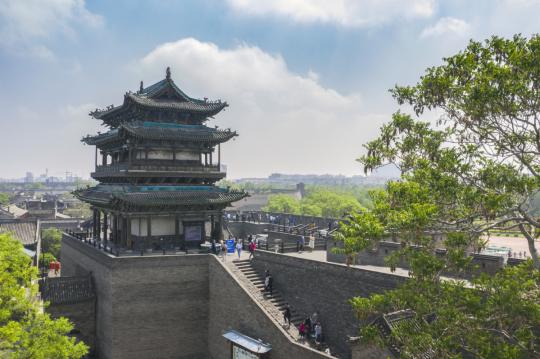 Tourists admire views from a tower building in the ancient city of Pingyao in Jinzhong, Shanxi province, on May 5. (Photo/Xinhua)

The boom in big data, cloud computing and artificial intelligence is expected to play a pivotal role in boosting Shanxi's culture and tourism industry which was hit hard by the COVID-19 pandemic as well as propel the country's high-quality development, a national legislator said.

Wang Wenbao, a deputy to the 13th National People's Congress, said the culture and tourism industry in Shanxi province has grown rapidly, with the average annual growth rate in total revenue at about 25 percent for five consecutive years.

"The culture and tourism industry has become an important engine for Shanxi's economic growth and a key to propel the transformation of the resource-based economy," said Wang, who is also chairman of the Shanxi Culture and Tourism Investment Holdings Group.

Wang said the novel coronavirus outbreak brought about unprecedented challenges to the local tourism industry, especially during the Spring Festival holiday. That is usually the peak season for tourism in the country, and the province's 670 scenic spots were forced to shut down.

According to Wang, 216 A-level scenic areas in Shanxi, except for one that is under repair, have resumed normal operations now that the contagion is under increasing control across the nation.

"The cutting-edge technologies, including augmented reality, virtual reality, AI, big data and the internet of things, which have a profound impact on the tourism industry, will be adopted in cultural and tourism scenic spots in the future, so as to offer customers immersive experiences and convenience," Wang added.

Shanxi has been striving to strengthen its tourism development in recent years, especially its three major tourist brand names which include Wutai Mountain, the Yungang Grottoes and Pingyao ancient city, as well as three main attractive themes, centering on the Yellow River, the Great Wall and the Taihang Mountain.

Wang said the provincial smart tourism cloud platform has been launched, with tourist attractions, starred hotels, travel agencies having access to the platform. This would promote the integrated development of the local cultural and tourism industry.

The country's tourism market also saw a strong recovery during the five-day Labor Day holiday. With regular epidemic control measures in place, the tourism market basically recovered to 50 percent of the level seen in the same period last year, said Wang Xiaofeng, an official with the Ministry of Culture and Tourism.

The COVID-19 outbreak is expected to have only a temporary impact on the tourism industry and the travel demand of people has not disappeared, said Peng Liang, chief researcher at Ctrip's big data laboratory. The pandemic may even accelerate the popularization of online tourism services, the researcher said.