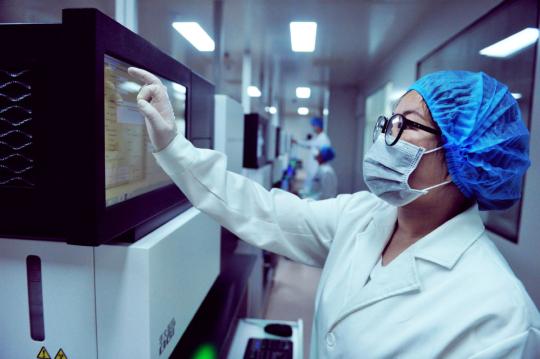 A staff worker operates a gene sequencer at a BGI Genomics facility in Qingdao, Shandong province, on May 29, 2018. (Photo/Asia News Photo)

There is still no international consensus on the regulation of human germ cells－such as sperm and ovain genetic engineering, even though governments, institutions and international organizations issued more than 60 statements related to the ethics of the technology between 2014 and 2018, according to a study published in the scientific publication The CRISPR Journal.

The study said the problem partly stems from the divergence of germ cell engineering into basic research, clinical research and clinical applications, because they are subject to varying degrees of regulation in different countries.

For example, basic germ cell research is prohibited in Germany, Italy and Switzerland.

However, in countries such as China, Israel, Singapore, Sweden, the United Kingdom and parts of the United States, scientists are allowed to create genetically modified embryos for research, but they can only be studied during the first 14 days of their development in vitro.

To further complicate matters, many regulations are "unnecessarily vague and obsolete", the journal said. "Limitations must be spelled out in statutory and regulatory instruments that are sufficiently clear to allow scientists to regulate their conduct based on those provisions."

In a column in Guangming Daily last year, Li Xin, director of the Center of Science and Technology Laws at Capital Normal University in Beijing, said the paramount question on any regulation related to human gene editing is how to ensure the technology is used in an appropriate, justified manner.

"Tackling this question is like opening a can of worms, leading to a range of sensitive issues," she said.

For instance, gene editing may be the only solution for patients with severe congenital disorders, but who has the authority to approve such a procedure and conduct experiments to edit the fundamental blueprint of life?

If gene editing is allowed for therapeutic treatments, what is to stop people from abusing it to augment their own bodies or those of their offspring?

"The line between augmentation and treatment is blurred. It depends on whether the procedure is necessary for someone's well-being－but well-being itself is also a vague concept," Li said.

"In this case, the purpose of the law is to fill the gap between theoretical speculation and practical measures with procedures, rights, responsibilities and legal obligations."

Yuan Lanfeng, an associate researcher at the National Research Center for Microscale Material Science in Hefei, Anhui province, said if gene augmentation ever existed, the rich and powerful would inevitably abuse it to gain an unfair biological advantage.

"If China does not have a law related to gene editing, then it will have no legal basis to stop those attempts," he said. "That would be detrimental to building China's image as a responsible nation."

Mao Yonghui, a senior nephrologist and a member of the ethical review committee at The Beijing Hospital, said that with the advent of the CRISPR-Cas9 gene-editing technique－in which the cell's genome can be cut at a desired spot－manipulating genetic material has never been easier or more accessible, because people can get the instructions and equipment from the internet, just like a chemistry set.

"This accessibility also makes regulating the technology incredibly difficult," she said. "We must ensure scientific research and exploration are done responsibly and abide by the law. Only then can we ensure the these endeavors benefit humanity."