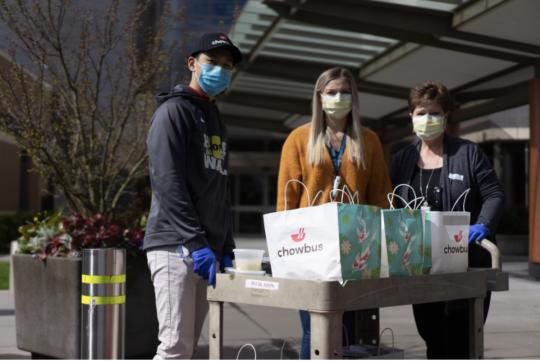 Chinese restaurants have been hit hard since the COVID-19 pandemic began, but they have teamed up to make complimentary meals for front-line workers.

In Washington state, where there have been 13,600 coronavirus cases and 765 deaths as of Tuesday, a campaign called Food With Love initiated by the Chinese Chamber of Commerce in Washington State (CCCWA) and several other organizations, fundraises and distributes meals to front-line staff with support from local restaurants.

The campaign began in April and aims to raise $400,000 in a month to produce 30,000 lunches for medical staff, first responders and community members in need of assistance.

Many hospital workers are unable to leave their premises to get food, due to grueling work hours and the immense strain the virus has placed on hospitals.

"The meals and the friendly, speedy, reliable daily deliveries literally saved the day," the University of Washington Medical School's Clinical Virology Lab staff posted on social media after receiving lunch and dinner boxes from Chowbus, an Asian food-delivery app that joined the campaign as a partner at the outset.

As of Tuesday, participating Chinese restaurants have made 14,470 lunch or dinner boxes and delivered them through Chowbus to 21 hospitals, police stations and mobile testing sites in the Seattle area.

"We have received $31,249 in cash donations and we really appreciate all the support from our community, including the initial efforts of Cai &Associates and Issaquah Highland Chinese Heritage Club, Jing Wei LLC and other individuals and firms, The Dolar Shop, IJ Sushi Burrito, and all the participating Chinese restaurants and businesses," said Lili Lu of the CCCWA.

The Chinese Restaurant Foundation (CRF), a nationwide organization based in Newark, California, has organized the We Work Together initiative to provide hot meals to front-line workers from April 11 to 30.

As of early last week, the CRF reported that it has donated more than 4,000 lunches to hospital workers, ER staff and police officers on duty during the coronavirus outbreak.

Betty Xie, the executive director of the CRF, told China Daily that Chinese dishes, which are usually served warm, are popular among doctors, who have limited access to hot meals.

According to the organization, more than 80 restaurants across the US have joined the initiative since it started. The registration for the second drive will run from May 1 to May 15.

Software provider Womply recently reported that about 59 percent of the nation's independent Chinese restaurants had suspended credit card and debit card transactions as of April 15, an indication that the restaurants had closed.

In New York, Wellington Chen, executive director of the Chinatown Partnership Local Development Corp, told CNN that only 40 of the 270 restaurants in Manhattan's Chinatown are open.

Despite the hardships, Tony Hu, the owner of Lao Sze Chuan in Chicago and the chairman of the US-China Restaurant Alliance, told the local ABC television station that it's important to feed the community that helped him be successful.

The alliance is a consortium of restaurants in Chicago, New York, Los Angeles and even Kalamazoo, Michigan.

The We Wok Together program they launched offers free lunch and dinner to anyone working the front lines, including police, firefighters, healthcare workers and media.

"A lot of people come to us for help," Hu explained. "We start to try to offer people free lunch and dinner because they're working the front lines, and they're serving the community, and we should take care of them."

Liu Yinmeng in Los Angeles contributed to this story.