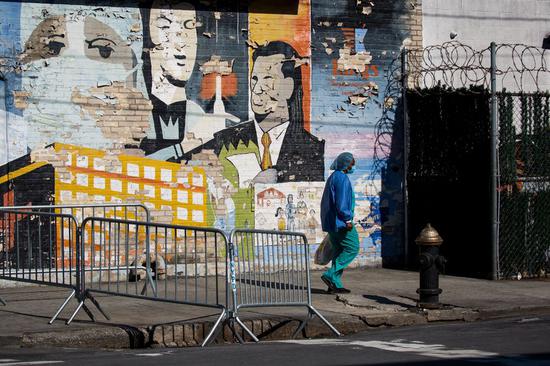 A healthcare worker is seen near SUNY Downstate Medical Center in New York, the United States, on April 28, 2020. (Photo by Michael Nagle/Xinhua)

U.S. economic activity saw the biggest quarterly decline since the 2008 financial crisis, indicating the severity of the COVID-19 induced recession, though analysts say the worst is yet to come.

U.S. real gross domestic product (GDP) in the first quarter contracted at an annual rate of 4.8 percent amid the COVID-19 impact, the biggest decline in over a decade, the U.S. Commerce Department reported Wednesday.

The decline in first-quarter real GDP was, in part, due to the response to the spread of COVID-19, as governments issued "stay-at-home" orders in March, according to the "advance" estimate released by the department's bureau of economic analysis.

Widespread "stay-at-home" orders and other measures to contain the virus led to "rapid changes in demand," as businesses and schools switched to remote work or canceled operations, and consumers canceled, restricted, or redirected their spending, the bureau noted.

"There was little good news in the underlying data, and the contraction that occurred in the first quarter is just a hint at what is to come in Q2," Jay H. Bryson, acting chief economist at Wells Fargo Securities, wrote in an analysis.

Noting that the lockdown of the economy, which occurred in most states, did not really start to take effect until mid-March or early April, Bryson said "we look for real GDP to contract at an unprecedented annualized rate in excess of 20 percent in Q2."

Bryson's projection is echoed by many, including White House economic advisor Kevin Hassett, who told CNBC earlier this week that the economy could contract up to 30 percent in the second quarter.

Diane Swonk, chief economist at Grant Thornton, a major accounting firm, said the COVID-19 recession that started in the first quarter is global in scope. "The losses we have yet to endure are expected to eclipse anything in living memory," she wrote in a blog Wednesday.

"There were broad-based declines across most spending categories," Bryson noted. "Specifically, real personal consumption expenditures dropped 7.6 percent in the first quarter, the steepest rate of decline in 40 years."

The decline in PCE generated a 5.26 percentage point drag on GDP in the first quarter, according to the report. The PCE grew by 1.8 percent in the previous quarter, contributing 1.24 percentage points to GDP.

Swonk, meanwhile, noted that the housing market was on a tear and faltered "only slightly" when the crisis triggered lockdowns in mid-to-late March.

"In fact, the housing market is one of the few sectors poised to make a comeback and help drive the economy out of recession, but only if we can preserve the mortgage finance system," she said.

Swonk also noted that the trade deficit narrowed but "for the wrong reason," as imports fell more rapidly than exports. Data showed that exports of goods and services dropped 8.7 percent, while imports declined 15.3 percent, so net exports contributed to 1.3 percentage points to the overall GDP growth in Q1.

Jason Furman, a professor at Harvard University and former economic adviser to President Barack Obama, said on Twitter that he would have predicted an increase in health spending during a pandemic, but the data says otherwise.

"Health spending down 4.9 percent in Q1 (not annualized). Responsible for nearly half of the overall GDP decline. Likely down much more in Q2," Furman said.

The sharp contraction in the first quarter follows a 2.1-percent increase in real GDP in the fourth quarter of 2019, according to earlier data from the bureau. The U.S. economy grew by 2.3 percent last year.

The outlook for inflation-adjusted real GDP in 2020 "reversed sharply," with 86 percent of respondents expecting a contraction, according to a survey released Monday by the National Association for Business Economics.

According to the Peterson Institute for International Economics' recently released semiannual Global Economics Prospects outlook, the U.S. output is expected to shrink by 8 percent in 2020, and the unemployment rate will probably peak around 20 percent in the early summer.

Hassett said he expects April's unemployment rate to surge to 16 percent or 17 percent, up from 4.4 percent in March.

Recent data from the U.S. Bureau of Labor Statistics showed that more than 26 million Americans filed jobless claims in a five-week period, as businesses, especially small ones, struggle to retain their employees amid shutdowns.

Many states this week are seeing a re-opening of their economies, as the coronavirus has killed over 58,000 people nationwide and infected more than 1 million as of Wednesday noon, according to a data-tracking tool developed by the Center for Systems Science and Engineering at Johns Hopkins University.

"Other countries have stepped up much more than the U.S. to test, track and blunt losses associated with the virus," Swonk said. "Wait-and-see is not an option for an economy hit by such an extraordinary external shock."

"One of the few silver linings to this crisis is the foresight it has given us. We actually know what we need to confront instead of just reacting to losses after the fact," she added. Enditem