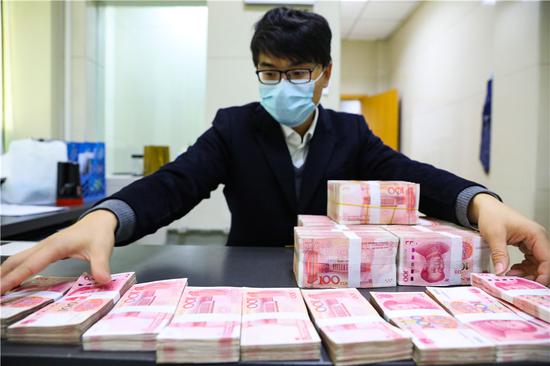 The yuan's share in international payments and settlement under the capital account hit a record in March, as cross-border investment replaced trade as the driving force for the Chinese currency's internationalization campaign, according to experts.

The country's forex regulator, the State Administration of Foreign Exchange, said that yuan-denominated cross-border payments accounted for 38 percent of all the currencies by the end of March, a historic high since the figures were published.

What this means is that the yuan's position in global payments and settlements has improved, significantly after a period of stagnation since 2015, the earlier peak when the RMB was added to the Special Drawing Rights of the International Monetary Fund. China's financial opening-up has further boosted the use of yuan globally, said experts.

According to data provided by global financial messaging network SWIFT, the yuan remained the fifth most active currency for global payments in value terms during March, with a share of 1.85 percent, up from the 1.65 percent in January. The RMB payment value increased by 21.48 percent on a monthly basis in March, according to SWIFT data.

Although the novel coronavirus pandemic has disrupted global financial investment activities, China's capital and forex markets showed resilience. During the first quarter, the trade surplus in goods and services declined. The net capital outflow during the period may drop aggressively, or turn to a net inflow, compared with the $20.1 billion net capital outflow during the same period a year ago, said Guan Tao, chief global economist of BOC International (China) Co Ltd.

Globally, the prices of risky assets and commodities started to fall at an unprecedented speed since the COVID-19 outbreak. Prices of safe-haven assets, such as gold and government bonds, gained as investors reassessed the economic impact of the virus and rushed for safety and liquidity.

Supported by a relatively stable yuan in the first three months, overseas investment in China's bond markets rose by 48 percent or by $16.7 billion during the period, the regulator said.

China's equity market, however, experienced net capital outflows of 179.9 billion yuan ($25.43 billion), compared with a net inflow of 193.5 billion yuan in the first quarter of last year, official data showed. The global equity markets at the same time suffered the fastest drop in history and the asset price declines reached about half the magnitude seen in 2008 and 2009 at the worst point of the sell-off.

As the global financial conditions have tightened abruptly with the onset of the COVID-19 pandemic, China can offer yuan liquidity to the global market, through expanded overseas investment, increased cross-border lending, increased imports and offshore yuan deposits, said Tu Yonghong, deputy director of the international monetary institute under the Renmin University of China in Beijing.

"The COVID-19 pandemic may increase yuan-denominated cross-border investment and accelerate the internationalization process," she said. "The yuan liquidity will supplement the financing gaps arising due to dollar shortages."

Yi Gang, governor of the People's Bank of China, the central bank, said in a recent article that the PBOC would use conversional monetary policy tools as long as possible to support the long-term development strategy, and avoid excessive aggressive stimulus, which may lead to inflation and a surge of debt. That means, the yuan-denominated assets can maintain relatively higher returns as the "safe haven" for international investors, as many economies look for subzero interest rates, analysts said.

"Further opening up of the financial sector, especially for the yuan bond market, will help promote the internationalization of the Chinese currency," said Tu.